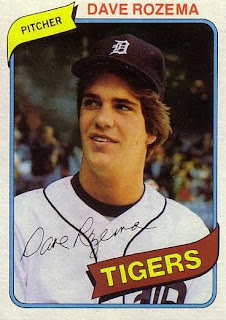 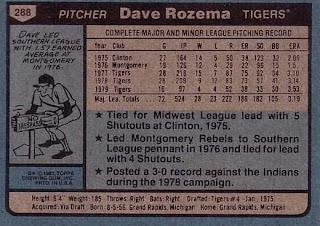 Who is this player?
Dave Rozema, starting pitcher, Detroit Tigers
After spending the first three years of his career exclusively as a starting pitcher, Dave Rozema began the 1980 season in manager Sparky Anderson's doghouse. In Spring Training, he missed a team bus when he overslept after a late night judging a wet T-shirt contest. When he began the season inconsistently, he was sent to the bullpen and spent the first half of the season in and out of the starting rotation. After he was blasted for seven runs by the Red Sox in mid-July, he spent the remainder of 1980 pitching in long relief, mainly in mop-up situations.

The Karate Kick. Undoubtedly, no one baseball player is more closely identified with that phrase than Dave Rozema. On May 14, 1982, Rozema was involved in one of the most bizarre injuries in the history of the game. In a wild game between the Tigers and Twins, Rozema was hurt during a bench-clearing brawl. He attempted to karate kick Minnesota's John Castino. The plan failed miserably and he blew out his knee, missing the remainder of the season. If you haven't seen it, you need to click the link.

But Rozema's career was much more than that one moment. The righthanded Rozema was a high school baseball star at Grand Rapids Central High School and was originally drafted out of high school in June 1974 by the San Francisco Giants, but did not sign. He played for Grand Rapids Community College in 1974 and was drafted in January 1975 by the Detroit Tigers. He dominated the minors, leading the league in ERA and winning a minor league championship with the Montgomery Rebels.

Called up to the Tigers in 1977, Rozema was the AL Rookie Pitcher of the Year, winning 15 games and was among the league leaders in ERA and complete games. At the time, it was thought that Rozema would be one of the cornerstones (along with Mark Fidrych) that would lead the Tigers' resurgence. Unfortunately, Rozema never had a season quite as good as 1977. He developed a reputation as a fun-loving, party animal and never quite overcame a myriad of injuries.

He was a member of the Tigers 1984 World Championship team, starting 16 games for with a 7-6 record and 3.74 ERA in 101 innings. Rosey did not appear in the post-season and left for the Texas Rangers via free agency the following year. After compiling a 5.91 ERA at the start of the 1986 season, Rozema was released by the Rangers on May 6, 1986, ending his 10-year major league career. He returned to his native Michigan where he resides today, still making several appearances in the Detroit area while working as a salesman for a waste disposal company.

Why I love this card
In 1980, Rozema was just a pitcher for the Tigers. If you live in Southeast Michigan, you know in the time since how his legend has grown. It is hard for me to pick one Rosey moment; is it him serving beer to Ron Gettlefinger at the Super Bowl in 2006, or my high school friend cursing him out for not giving him an autograph five years prior? Wait, what aboutBobblehead night or maybe Grand Slam 1978 taking him deep at Tiger Stadium - "That's the sound hitter's like." Sorry, absolute overload on this post.

Something else....
I almost forgot. Kirk Gibson is Rozema's brother in law. Rozema and Gibby married sisters in a double ceremony at Grosse Pointe Memorial Church in Grosse Pointe Farms, Michigan. The legend goes ballplayers met their future brides at an establishment called "The Booby Trap." I'll let your imagination take it from there.

On this date in 1980:
The Cubs-Expos game was suspended due to darkness. If you recall dear readers, Wrigley Field had no lights, so when the game went long and into extra innings it had to be called. The game was restarted on August 8, 1980 with the Cubs winning on a grand slam by Cliff Johnson in the bottom of the 14th inning. In an interesting twist, Johnson wasn't with the Cubs when this game started and was acquired by the Cubs via trade on June 23.
Posted by Dean Family at 4:10 PM

Labels: (On this date), Detroit Tigers