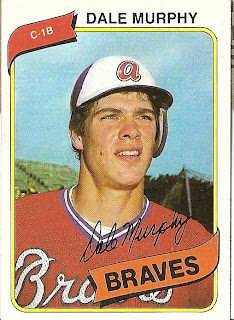 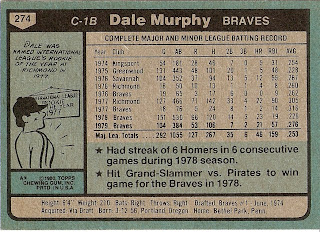 Who is this player?
Dale Murphy, outfielder, Atlanta Braves
While the position flag on Dale Murphy's card says "C-1B" the experiment of Murphy behind the plate was over in 1980. Moved to the centerfield exclusively for the first time, Murphy blossomed into an All-Star, clubbing 33 home runs and driving in 89. Although he would lead the league with 133 strikeouts, the season would prove to be a harbinger of things to come as Murphy was poised to become on of the more memorable players of the decade.

Dale Murphy was a prep all-star and eventually the best high school talent in Portland, OR. The Phillies initially showed interest in Murphy but the Braves chose Murphy in the first round of the 1974 amateur draft. He quickly climbed through the Braves minor league system and reached the majors in his third professional season. The Braves had drafted Murphy for his defensive abilities and athletic skills and had expected him to be a catcher. However, trouble with his throwing arm prevented him from becoming an everyday player and threatened to derail his career. He struggled mightily in his early years and it was only through the intervention of owner Ted Turner that prevented Murphy from quitting baseball entirely.

After Murphy's breakout 1980 season, he became one of the best all-around players in the game. The Braves won 13 straight games to start the 1982 season and Murphy led them to the playoffs. He also led the league in RBI, was named an All-Star and won the first of five consecutive Gold Gloves. He was rewarded with the NL MVP Award. "Murph" was even better in 1983, raising his batting average over 20 points and again leading the league in RBI. He also stole 30 bases, played in all 162 games and led the league in slugging average. At that particular moment, there weren't many in the game who were better.

He established a reputation as one of the game's all-around "good guys" and went to great lengths to put forward a positive image. One writer, determined to find "dirt" on Murphy was only able to come up with one speeding ticket that Dale received when he was running late for a speech at a nearby church. On the diamond, he continued to produce league-leading numbers and started the All Star game for the National League five seasons in a row (1982-1986). His 1987 season is largely overlooked, despite a .295 average, 115 runs scored and a career-high 44 home runs.

After the 1987 season, Dale began to slip offensively and he never regained the dominance that he displayed earlier in the decade. In a shocking move, he was traded to the Philadelphia Phillies during the 1990 season. The change of scenery did little to improve his numbers and he was traded again, to the Colorado Rockies in their inaugural 1993 season. After 26 games with the Rockies, Murphy decided to retire and bring a close to his 18-year career.

Today, Murphy involves himself in several charitable causes, including Cystic Fibrosis, and is very active in the Church of Jesus Christ of Latter-day Saints. His number was retired by the Braves in 1994 and he recently started a nonprofit organization called the iWontCheat foundation. The purpose of the foundation is to promote ethics in youth athletics and deter steroid use and cheating. His son Shawn, is an NFL offensive lineman, formerly with the Miami Dolphins and Tampa Bay Buccaneers.

Why I love this card
Like most kids in my neighborhood, I was a major Murphy fan. It was likely because of our ability to watch WTBS in our early days of cable. At one point, I wouldn't trade a Murphy card for anybody and I actually hid this card from my friends because I knew that the others didn't have it and I wanted to avoid trade discussions at all costs.

Something else....
I was such a Murphy fan that I even had this poster. 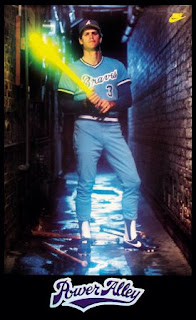 Roughly around the time Murphy stopped making the All-Star team this poster got replaced by one of Belinda Carlisle. The Braves didn't make a great trade for Murphy and neither did I.

On this date in 1980:
Murphy was 1-5 with a double and a run scored as the Houston Astros nudged the Braves 3-2 in 11 innings at Fulton County Stadium.
Posted by Dean Family at 9:40 PM

Labels: (On this date), Atlanta Braves