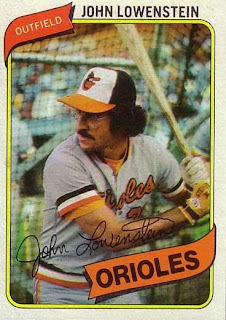 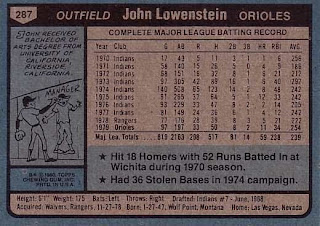 Who is this player?
John Lowenstein, outfielder, Baltimore Orioles
Perhaps no single statistic or anecdote describes John Lowenstein's 1980 season as what happened on June 19. With Baltimore trailing the Oakland A's by a run in the 7th inning, Lowenstein smacked a game-tying single to right. Lowenstein tried to take second on the throw home, but A’s first baseman Jeff Newman cut the ball off and fired towards second base. The ball bounced off Lowenstein's neck, allowing the go-ahead run to score. Then things got dramatic. Lowenstein stayed down and a stretcher carried him off the field. Amidst stunned silence, Lowenstein sat up abruptly and raised both his fists. The crowd went wild. He wasn't hurt badly and returned to the lineup a week later. John finished the season batting .311 with several clutch performances along the way.

A popular fan-favorite, the lefthanded-hitting Lowenstein is one of the best baseball players to come from the state of Montana. After three years starring as a shortstop at the University of California-Riverside, Lowenstein was a low-round draft selection by the Cleveland Indians in 1968. After a year in the military, he rose through the minor league ranks and was named an American Association All-Star in 1970. When he led the club in batting during Spring Training the following year, he earned his ticket to the major leagues.

A versatile performer, Lowenstein played first, second and third with the Tribe, but was most often used as a designated hitter. In eight seasons with Cleveland, John only appeared in more than 100 games one time (1974) and batted a collective .239. The Indians had difficulty finding Lowenstein a regular place to play; so much so that they traded him to the Toronto Blue Jays in December 1976, only to re-acquire him the following March, without ever appearing in a game as a Blue Jay.

After a one-year stopover in Texas, Baltimore signed Lowenstein in the spring of 1979. The move would rejuvenate his career. Famously platooning with Gary Roenicke, Lowenstein was a significant member of the 1979 AL Champions. His extra-inning, pinch-hit home run won Game 1 of the ALCS as Baltimore would claim the AL East flag. He had another clutch home run in Game 2 of the 1983 World Series, coming at a crucial moment and turning the Series in the O's favor. John batted .385 as Baltimore won the championship in five games. His platoon with Roenicke was so effective that in 1982 the two combined to bat .292 with 45 homers and 140 RBI.

Alternately known as "Steiner" and "Brother Lo" by his teammates, Lowenstein retired early in the 1985 season after 16 big league seasons. When he retired, he was the only man to homer from nine different positions (1B, 2B, 3B, SS, RF, CF, LF, DH and PH), a mark since matched by Rex Hudler. His colorful personality was a natural for television and he spent ten seasons as a commentator for the Orioles. Today, Lowenstein is enjoying retirement in Nevada.

Why I love this card
It reminds me of the summer nights when I used to keep score to games on television. I would be allowed to stay up late and that was always a huge deal. I never took out my cards just in case it was perceived that I was making a mess and everything would be ruined. Therefore, I had no frame of reference and I always spelled Lowenstein or Roenicke wrong. It was inevitable. Happened every time. Even on this post, I triple checked since I am still self-conscious about it. I wish I would have kept those scorecards, though.

Something else....
There are several quotes attributed to Lowenstein over the course of his career, but my favorite has to be one when he was asked for his autograph:

Sorry kid, I left it in the clubhouse.

On this date in 1980:
2000 people in South Korea are killed as part of an uprising against the current government. The Kwangju massacre was to became an important landmark in the struggle for South Korean democracy. It heightened provincial hostility and marked the beginning of the rise of anti-American sentiment in South Korea.
Posted by Dean Family at 11:30 PM