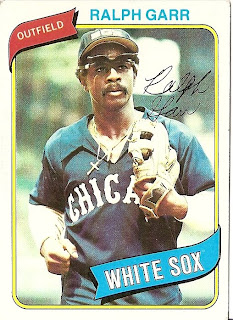 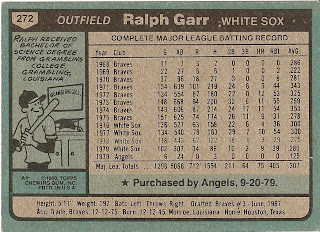 Who is this player?
Ralph Garr, utility, Chicago White Sox
Famously known as "Roadrunner," the 13-year career of Ralph Garr was over by the summer of 1980. Appearing in only a handful of games for the California Angels, Garr was released on June 6th. The 34-year old Garr was a career .306 hitter that was batting .190 at the time of his release and didn't catch on with another team. This upset Garr, who said:

I can’t understand it. I never complained. They (the Angels) weren’t fair with me. They’re giving guys $1 million a year today that couldn’t hold my jock.

Garr first attracted national attention when he batted .582 at Grambling College in 1967. This earned the Ruston, Louisiana native a mention in the "Faces in the Crowd" section of Sports Illustrated. The Atlanta Braves selected him that summer in the amateur draft and he batted .324 over four minor league seasons, including an International League record .386 in 1970. His bat earned him looks by the Braves three straight years (1968-1970) but his glovework was of concern to Atlanta and his time at the major league level was brief.

Ralph earned a break in 1971 when he replaced the injured Rico Carty as the Braves leftfielder. He responded with 219 hits, 101 runs scored and 30 stolen bases. His .343 average was good for second in the National League. The Braves, eager to capitalize on the recognition of their new star, reached an agreement with Warner Brothers Inc., for exclusive rights to formally nickname Garr Road Runner II. Yes, as in The Second. To his peers, however, Garr most often responded to Gator, in honor of his Louisiana heritage.

Garr would bat .317 over the next five seasons as a Brave regular, including a league-leading .353 in 1974. In what would be his career year, Garr was selected to the All-Star team en route to a circuit topping 214 hits and 17 triples. He became the Braves highest paid player through arbitration in February 1975, a bitter process for both sides. Garr was the subject of trade rumors all year and slumped, batting under .300 for the first time as a regular. Predictably, Atlanta traded him to the Chicago White Sox.

In Chicago, Garr was a solid everyday player, batting .300 twice. However, he never quite returned to All-Star status and didn't lead the league again in any offensive categories. He was one of the "South Side Hitmen" in 1977, typically batting out of the leadoff position. He was sold to the California Angels in 1979 as insurance for the stretch drive. The Angels went on to the playoffs, but Garr hit only .125 and did not make the postseason roster.

Since his retirement, Garr has been with the Braves organization since 1985 working as an area scout. He has also been honored by being inducted into Halls of Fame for the Atlanta Braves, the International League, the Louisiana Sports, and Grambling State. In 2009, he was inducted into the College Baseball Foundation’s Hall of Fame.

Why I love this card
Garr's flip shades were something that I wanted for probably five years. Nothing said "baseball player" more than the flips, they were ultra cool.

Something else....
I don't understand Topps' decision-making process. Garr was sold to the Angels in September of 1979 yet he is pictured here with the White Sox. Topps even acknowledges the transaction on the back of Garr's card. This is not without precedent as Topps did something similar with Dock Ellis' card. On the other hand, they airbrushed John Montague's card to reflect the new team. Don't get me wrong, I really like the photo used on this card and I'm not really a fan of airbrushing, but it would be nice to know the back story on why some cards were and some were not. Below is the 1980 OPC card that has the correct team indicated. 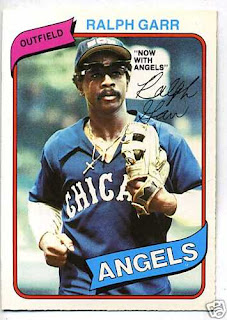 On this date in 1980:
The Toronto Blue Jays moved into first place in the AL East by way of their 9-2 win over the California Angels. It was the first time in team history the Jays (15-9) were in first place this late into the season. They would finish the 1980 season in last place at 67-95.
Posted by Dean Family at 8:03 PM