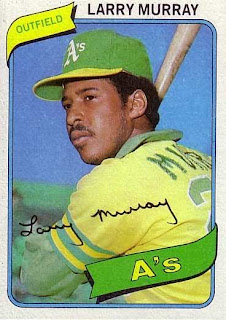 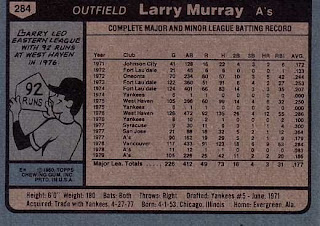 Who is this player?
Larry Murray, outfielder, Oakland A's
While not known at the time, the six-year major league career of Larry Murray was already at an end. In Spring Training Larry was designated for assignment and spent the season with the Triple-A Ogden A's. Murray appeared in only 13 games that season batting only .233 with one home run and three RBI.

A phenominal three-sport athlete at Phillips High School in Chicago, Murray chose baseball after a high school career in which he broke and established numerous records as a standout running back/defensive back. He was taken in the 5th round of the 1971 draft by the New York Yankees, and spent the next six seasons in the minor leagues. Murray displayed impressive speed and a strong throwing arm, but his hitting was suspect. He failed to bat over .300 during that span in the bushes, but did earn three brief looks by the Yankees during 1974-76. He played in a handful of games each year and managed only four hits.

Nicknamed "Slick," Murray had his finest minor league season in 1976, leading the Eastern League in runs and being named an All-Star. He was assigned to Triple-A Syracuse in 1977 before he was involved in a multi-player deal with the Oakland A's. The trade would be the biggest break in Murray's career. As the A's fell from the perch of perennial contender in the wake of free agency, Murray earned regular playing time. He appeared in 90 games with the 1977 A's, but only batted .179.

Murray spent most of the 1978 season in the minors, but returned to the A's in 1979. He began the year as Oakland's right fielder, but eventually lost the job to Tony Armas. He also saw his playing time diminish thanks to a talented rookie named Rickey Henderson. Larry struggled at the plate all summer, finishing the year batting .186. Even his greatest asset, his speed faltered as he was cuaght 50% of the time. He attempted a comeback with the A's in Spring Training 1981 but was cut and his career was formally over.

Currently, Larry lives in California and was quoted in the Chicago Defender recently upon the passing of his high school coach, Carl Bonner. During his 42-year career as a coach/physical education teacher at Wendell Phillips High School, Bonner became one of the winningest coaches in Illinois history, winning more than 200 games. He also played a pivotal role in sending thousands of underprivileged student-athletes to college and beyond. Said Murray:

“He was one of the greatest men I knew. He helped shape us into who we turned out to be as men. It wasn't just football. He was like our father when our fathers weren’t there. We were a gang-infested school back then.”

Why I love this card
The minor league records occassionally listed on the back would always interest me. I would always ask my Dad where certain cities were when it wasn't obvious. I had an atlas and would look first. It may not have been Murray's card, but I do recall almost stumping him on Oneonta. I sat on the porch while he finished cutting the front lawn. When he was done he just looked at me and said "New York." Back to the drawing board....

Something else....
Murray finished his career with 20 stolen bases in 30 attempts. His 20 steals were the most by a post-Deadball Era player with a career average under .200. Murray is also featured in the recent book "Mendoza's Heroes" by Al Pepper.

On this date in 1980:
The New York Islanders defeated the Philadelphia Flyers in overtime of Game 6 of the Stanley Cup finals. It was the first Cup win for the Isles who would go on to create a dynasty and win four in a row. The game winner can be viewed here.
Posted by Dean Family at 8:33 PM