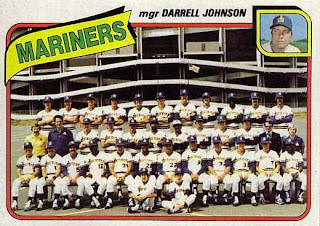 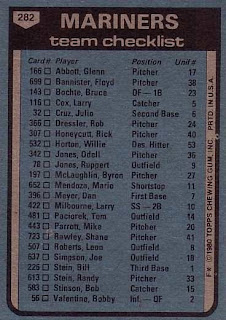 As the Seattle Mariners prepared to set sail for the fourth season in their existence, 1980 began with the club filing a lawsuit against King County, owners of their home park, The Kingdome. Specifically, the Mariners were suing for breach of contract and for failing to cooperate with the ballclub. The Mariners were led to believe that their domed stadium would be similar to the Houston Astrodome and built its club around pitching and defense. Instead, the outfield walls were contructed 30 feet closer than original plans and did not allow the Mariners to improve as quickly as they should have, leading to a decline in attendance.

Regardless, the 1980 edition of the Seattle Mariners were not an impressive bunch. They were regarded to have an impressive group of pitching prospects, but during the offseason, they traded one of the most popular and productive players, Ruppert Jones, to the Yankees for a package of prospects to address their depth. Most preseason publications picked the Mariners for fifth place, maybe higher should the pitching come together. Seattle did well the first month of the season, winning one more game than they lost and at the end of May, were in fourth place with a 23-24 record.

Things went downhill from there. The Mariners went 24-58 over the summer months and the frustration began to set in. Attendance had dropped off significantly and the Mariners drew just 836,000 fans. Injuries began to mount and there were rumors of an impending sale of the club. For a city who already lost one major league club, there was a fear that the team would relocate to another city. In the middle of all of this, the Mariners fired their manager Darrell Johnson, and replaced him with Maury Wills, just the third black man to manage in the Major Leagues.

Wills promised a rise to repectibility and an emphasis on fundamentals. They had a franchise-best six game winning streak in September, but finished the year losing eight in a row. Their 59-103 record was worst in baseball. Pitcher Rick Honeycutt was their only All-Star, starting the season 7-1 before faltering. Fan favorites Bruce Bochte hit .300 and Julio Cruz was fourth in the AL in stolen bases. Mike Parrot had an interesting season, winning one game and losing 16, all of them in a row. When the season ended, the Mariners traded Honeycutt in a multi-player trade that landed Seattle slugger Richie Zisk.

Why I love this card
The exterior shot of the Kingdome. Not many of the teams did that (if at all) on team cards so to have an outdoor shot was fairly unique, even if it did look like freeway on-ramps.

Something else....
Longtime Pittsburgh Pirate and Hall of Famer Bill Mazeroski was the third base coach for the Mariners in 1980. I try and I try, but I cannot envision "Maz" wearing the Mariner pitchfork.

On this date in 1980:
Apparently, I was wrong about the release of "The Empire Strikes Back" as it was released on May 21st and not May 20th. Either way, it's worth another mention in my mind. Here is the original trailer.
Posted by Dean Family at 1:26 PM