Another Piece of My Childhood is Gone.....

As the years pass, different parts of my youth are ceasing to be. My grandparents and my Uncle Frank have all died. My former elementary school closed in 2003 and many of the local neighborhood hangouts are not what they were. All of the places where I bought baseball cards have been gone for ages.

Even the place where I learned to love the game, Tiger Stadium, is gone. Even some of the people connected to my childhood through baseball are gone too. Mark Fidrych. George Kell. Kirby Puckett. Things change, I get that.

Harwell was the longtime Tigers broadcaster and subconscoiously for me, one of the reasons behind this blog. The pictures of the ballplayers and teams on these cards are the sights, but Harwell was one of the sounds. For me and millions of kids like me, he is the voice of baseball.

That may sound like hyberbole but if you grew up in Michigan, you can identify. And everything that has been written about what kind of man he was is accurate, not just something kind to say now he has passed. I had the pleasure of meeting him a half dozen times or so and he was nothing short of a classy gentlemen to anyone he met.

Whenever I think of Ernie Harwell, I think of other things other than baseball. I think of my Uncle's garage, my Dad's old Buick and my first radio. I think of the life-long friends I have made that have the same feelings that I do today. How Ernie is one of our common bonds. I think of Tiger Stadium and my personal connection to that old ballpark. And I think of my children, who will never know a finer broadcaster.

If somehow, we would all make the same impression on each other that Ernie Harwell has made on us, the world would truly be a better place. 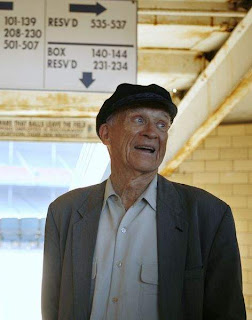