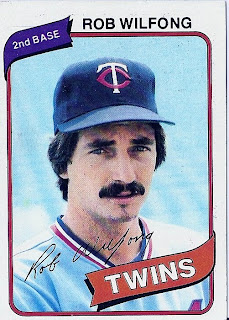 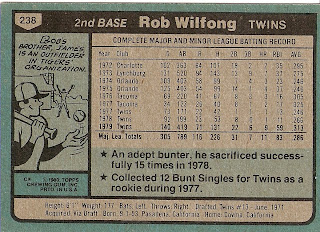 Who is this player?
Rob Wilfong, second baseman, Minnesota Twins
In just his second full season as an everyday player, the sure-handed Rob Wilfong set an American League record for second basemen in 1980 when he posted a .995 fielding percentage. He made only three errors all season, but incredibly, did not win the Gold Glove Award for his fielding prowess. Wilfong tumbled at the plate, however, as his batting average dropped 65 points from the previous year. While his decline at the dish raised some eyebrows, Wilfong ended the 1980 season as the clear incumbent at his position for the Twins.

The Pasadena, CA native was selected by the Minnesota Twins in the 1971 amateur draft and hit a home run in his first professional at-bat with Charlotte. He was a Southern League All-Star with Double-A Orlando and batted over .300 at the Triple-A level. A strong Spring Training 1977 earned him a spot on the major league roster and he traveled north with the Twins, making his debut in April, 1977. Wilfong spent two years as an understudy before finally winning the position from Bob Randall in 1979.

He responded with the best statistical season of his career. The lefthanded hitting Wilfong led the team with a .313 average and achieved career highs in home runs (9) and RBI (59). An adept bunter and contact hitter, Wilfong had 22 bunt hits in 1979 and led his league with 25 sacrifice hits. At the time, it was thought that he, along with Roy Smalley and John Castino would be part of a core of young players that would lead the Twins in the 1980s.

Alas, it was not to be. By 1982, Wilfong was gone, traded to the California Angels. The Twins received Tom Brunansky in the deal who would go on to be a major part of the 1987 World Champions. But it would be Wilfong who would taste the postseason first, in 1982 and again in 1986 as the Angels won two AL West crowns. Meanwhile, Wilfong served primarily as a defensive replacement and utility man in his five seasons in Anaheim.

In the classic '86 series, his role in the famous Game 5 has largely been forgotten. After Dave Henderson shocked Donnie Moore and the Halos with his famous home run, the Angels, led by Wilfong's clutch RBI in the 9th, tied the game. Unfortunately, California lost the game and the series to Boston in seven. He made a brief cameo with the Giants in 1987 before retiring after 11 years in the majors. In retirement, Wilfong was a scout, most recently with the Detroit Tigers.

Why I love this card
We loved saying his name when we were kids. Nothing more, really. Just riding our bikes, Slurpees in hand and screaming "WILLLLLLFONNNNNG" for reasons only known to 9-year olds.

Something else.....
Wilfong's last professional hit was a home run with the Giants on May 7, 1987. With home runs as his first and last pro hit, Wilfong has nice bookends to his baseball career.

On this date in 1980:
The soap opera "Love of Life" came to an end after 30 years on the air. Here is a CBS World News report with the incomparable Walter Cronkite.
Posted by Dean Family at 5:54 PM