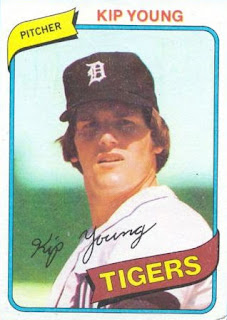 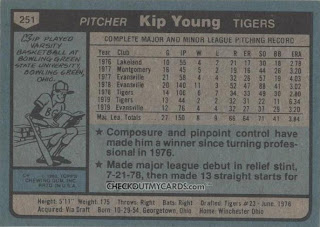 Who is this player?
Kip Young, swingman, Detroit Tigers
With Sparky Anderson at the helm for his first full season in 1980, Kip Young was not in the Detroit Tigers' plans. He was sold to the Seattle Mariners in November 1979 and made the club coming out of Spring Training. When the Mariners signed Dave Heverlo on Opening Day, Young was the odd man out and sent to Triple-A Spokane. He was unexpectedly released by the Mariners in late May, but caught on with the Cincinnati Reds organization. Kip spent the remainder of the year at Indianapolis and did not make a major league appearance.

A native of Georgetown, Ohio, Young holds virtually every season and career pitching record at Bowling Green University. A graduate of Whiteoak High School, he was a regular in the Bowling Green pitching rotation for four years. For his collegiate career, he had a 37-6 record with a 2.11 ERA and 232 strikeouts in 295 innings. The wins, strikeouts, ERA, and innings pitched are all Falcon records. After his senior season, Young was drafted by the Detroit Tigers in 1976, a draft that saw the Tigers select Alan Trammell, Jack Morris and Ozzie Smith.

In less than two years, Young was inserted into the Tigers' rotation after the All Star break and immediately reeled off four consecutive complete game victories. He showed tremendous promise as the 1978 season came to an end, as he won six games, posted a 2.81 ERA and had seven complete games. It appeared that Young was an excellent candidate for the Tigers starting rotation in 1979. However, inclement weather in the first month of the year allowed only two appearances and Young struggled with his control. He was sent to Triple-A Evansville to get some work in and when he returned, Sparky Anderson was named new manager of the Tigers.

Young was unable to find a spot on the Tigers pitching staff and struggled as both starter and reliever. It would prove to be the final campaign of Young's brief, two year career. He would pitch at the minor league level for two more years before finally calling it a career. Today, Young is a physical education teacher for the Eastern-Local School District in Brown County, Ohio.

Why I love this card
I have already professed my fondness for any Detroit Tiger card, but I was always intrigued by the fact that Kip was not a nickname, but Young's given name. I had never known another Kip and even today, the only other Kip that I ever heard of was Kip Wilson, Tom Hanks' character from Bosom Buddies.

Something else....
Speaking of Bosom Buddies, I'll use that as a cheap transition to post a picture of Donna Dixon who was on the show as well. Hello, Mrs. Dan Ackroyd: 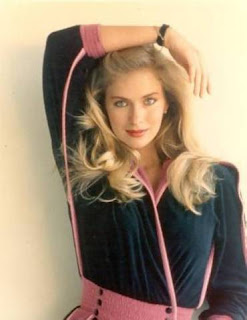 On this date in 1980:
The Academy Award nominations were announced today. Nominees for best picture were: Kramer vs. Kramer, All That Jazz, Breaking Away, Norman Rae and Apocalypse Now. Kramer would go on to claim the prize.
Posted by Dean Family at 10:36 PM