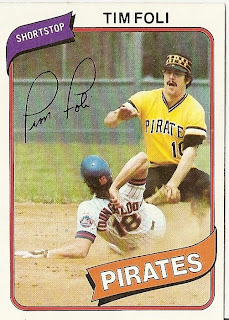 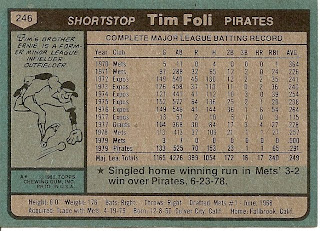 Who is this player?
Tim Foli, shortstop, Pittsburgh Pirates
As the 1980 season got underway, shortstop Tim Foli had already endeared himself in the hearts of Pittsburgh Pirates fans. Known for a good glove and a quick temper, Foli was one of the keys to the Pirates' championship in 1979. As the #2 hitter in a potent lineup, Foli was inconsistent at the plate to start the season and missed the first two weeks in June due to a leg injury. Foli was hot upon his return, twice having four hit games and finished the year batting .265. When the season concluded, Pittsburgh fans voted Foli the most popular player on the team.

A multi-sport star at Notre Dame High School in Sherman Oaks, California, Foli was offered a football scholarship by USC. When the New York Mets drafted Tim with the first overall selection in the 1968 draft, he instead decided on a baseball career. Foli worked his way up the minor league ladder and made his debut with the Mets in September, 1970. The following season, he spent the entire season in New York, splitting time between second and third base. However, before the 1972 season he was part of a package of young players traded to Montreal for Rusty Staub.

Foli immediately became the Expos' starting shortstop and would remain there for the next five seasons. The man known as "Crazy Horse" was a popular player in Montreal where he gained a reputation as an excellent contact hitter that was difficult to strike out. Although he batted only .246 during his Montreal tenure, he did hit for a natural cycle during the 1976 season. Shortly after the 1977 campaign began, he was traded to Montreal for Chris Speier. He went back to the Mets for 1978 before being on the move again, traded to Pittsburgh early in 1979.

His acquisition was seen as a primary catalyst as the Pirates surged to the World Championship in 1979. Posting a career high .291 batting average and .333 in the NLCS and the World Series. It was the epoch of Foli's professional career. Within two years, however, management began to dismantle the championship club and Foli was traded to the California Angels. Initially relegated to the bench, injuries to Rick Burleson gave Tim an opportunity and he helped the Angels to the AL West title. Unfortunately, the Angels lost a heartbreaking series to Milwaukee.

After leaving Anaheim in 1983, Tim bounced from the Yankees and back to the Pirates for his 16th and final season in 1985. He immediately found a role as a coach with the Texas Rangers (1986-87), the Milwaukee Brewers (1991-95) and Cincinnati Reds (2000-06). He was the manager of the Syracuse Chiefs in 2009, but was removed in October. Tim retained a position within the organization and will be involved with the Washington Nationals in 2010.

Why I love this card
Foli's card is one of the best action shots in the 1980 set. Then and now, I love everything about this card; the Stargell Stars, the signature highlighted seperately and not across the player's body, Joel Youngblood sliding into Foli (I think he's out). The only thing better would have been to photograph Foli with his trademark batting stance, choked up high on the bat. I can't recall a player since Foli that choked up as much as he did.

Something else....
Foli's temper wasn't relegated to his playing days. As manager of a Puerto Rican team, he was fired in the middle of the Caribbean World Series, when he clashed with the General Manager, and fought with fellow Reds coach Ron Oester in 2001. Foli had to have stitches and Oester had a bite mark on his thigh. I'll let you draw your own conclusions.

On this date in 1980:
Robert Redford appeared on the cover of People magazine. An article in this issue details Bruce Jenner's divorce opening the door for the whole Kardashian mess to come.
Posted by Dean Family at 10:57 PM