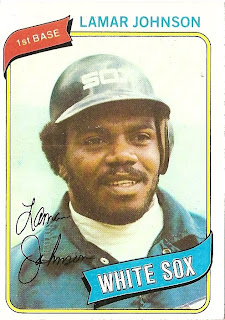 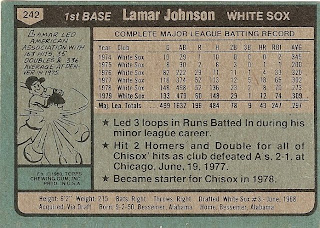 Who is this player?
Lamar Johnson, first baseman, Chicago White Sox
Splitting his time between first base and DH, Lamar Johnson was one of the top run producers on the Chicago White Sox. The righthand hitting Johnson led the team with a career-high 81 RBI. Lamar started off the 1980 campaign hot, hitting .381 in April with 17 RBI en route to being named Player of the Month. He was moved to the designated hitter's role almost exclusively in the second half, earning 39 RBI in that role. He was the White Sox cleanup hitter and twice had four hits in a game during 1980.

Johnson was selected by the White Sox in the third round of the 1968 amateur draft and slowly moved up the minor league ladder. He led the Midwest League with 26 HR and 89 RBI at Appleton in 1972 and eventually was give a brief look by the White Sox in 1974. He won his promotion to the parent club with a sensational 1975 season at Triple-A Denver where he hit .336 with 101 RBI. Despite consecutive .300 seasons in 1976 and 1977, Lamar was often used in a reserve role, filling in at either first base, DH or pinch-hitting.

Given a full-time opportunity in 1978, Lamar appeared in a career high 148 games, and driving home 72 runs. He fared even better in 1979 when he fashioned a 19-game hitting streak, finishing the season with a .309 batting average, 12 HR and 74 RBI. Unfortunately, the White Sox were not a very good team during this period, and the Pale Hose expected more production from their first baseman. Perhaps this was an unrealistic expectation as Johnson was one of the more reliable White Sox of this era, but nevertheless, Chicago did not attempt to resign him as a free agent and he left for the Texas Rangers prior to the 1982 season.

Lamar played only one year with the Rangers, the last in his nine-year major league career. In 1989, Johnson played for the St. Petersburg Pelicans of the Senior Professional Baseball Association. In the league's championship game against the Johnson hit a home run and drove in three runs to help lead the Pelicans to the title. Johnson was named the "Star of Stars", the name given to the MVP of the championship game. He returned to the SPBA in 1990 and stayed with the league until it folded.

Johnson spent several seasons coaching and managing at the minor league level. He earned major league coaching experience with the Milwaukee Brewers (1995-98), Kansas City Royals (1999-2002) and most recently, the Seattle Mariners (2003). When Hall of Famer Larry Doby died in 2003, Johnson was quoted in his obituary.

Why I love this card
Because I had no idea what "loops" were when I read this card. At this stage in my life, the only loops were Fruit Loops. My dad eventually told me what they were and I found this feat quite impressive. But not before I got over seeing the word "loops" on the back of a baseball card.

Something else....
Here's a pretty good day: On June 19, 1977, against the A's, Johnson sang the National Anthem before the game, and followed up with two homers, the only White Sox hits on the day, as the Sox won 2-1. An accomplished singer, Johnson sang the national anthem quite a few times in his career before a ball game.

On this date in 1980:
Speedskaters Eric and Beth Heiden appear on the cover of Time magazine. The Winter Olympic Games were soon to take place in Lake Placid, NY and the Heidens were the story going into the Games. Of course, this Olympics would become memorable for a certain hockey team....
Posted by Dean Family at 9:39 PM