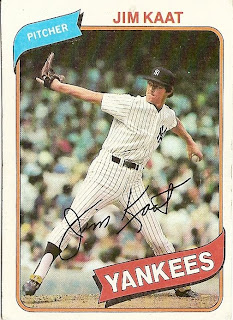 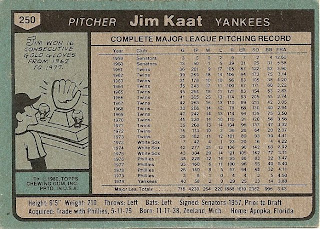 Who is this player?
Jim Kaat, relief pitcher, New York Yankees
Like many Yankees before him, Jim Kaat began the 1980 season irritated with Yankee owner George Steinbrenner. As Kaat wrote in his 2003 book, first Steinbrenner reneged on his 1980 salary and then made him report to Spring Training as a non-roster player. His pride challenged, he pitched 19 consecutive scoreless innings and made the squad. He only appeared in four games and was sold to the St. Louis Cardinals at the end of April. He was very effective in middle relief for the Cards, winning six games, losing four and lodging a 3.40 ERA.

When Jim Kaat retired in after 25 seasons in the major leagues, he had spent more time in a major-league baseball uniform than any other player. in a career that spanned four decades, he originally broke in with the Washington Senators in 1959. In the next quarter century, he won 283 games with five different teams, but made his mark as a member of the Minnesota Twins. He led the league with 25 wins in 1966 and won 10 or more games for fifteen consecutive seasons. He was consistently among the league leaders in innings pitched and after he transitioned to the bullpen, he became a World Champion with St. Louis in 1982.

History will remember Kaat for two things: his 16 consecutive Gold Gloves and his reputation as a fast worker on the mound. Legendary pitching coach once said he never saw a pitcher work as quickly as Kaat and his games consistently were little more than two hours. For example, in 1974, the year Kaat won 21 games for the Chicago White Sox, his games averaged 2 hours 12 minutes per start. Nine starts finished in under two hours and the only two games that went longer than three hours were 12 inning affairs.

For many years, Kaat held the record for Gold Gloves by a pitcher until it was eclipsed by Greg Maddux. However, recent studies have attempted to question his real prowess as a fielder. Cited as evidence is his 1969 season, when he won a Gold Glove in spite of eight errors and a fielding percentage of .826. Kaat's smooth delivery and excellent pickoff move did enhance his reputation, but one does not win 16 consecutive Gold Glove by reputation or accident.

When his playing career ended, Pete Rose hired him as a coach with the Cincinnati Reds for a two years (1984-1985). He then transitioned to a lengthy broadcasting career for Twins and Yankees, but also for CBS, NBC, ABC, Fox Sports, ESPN, TBS and the MLB Network. He also broadcast the College World Series and the World Baseball Classic, winning seven Emmy Awards for excellence in sports broadcasting. In 2009, Kaat retired from his broadcasting career and also ended his longtime blog, Kaat's Korner.

Why I love this card
You had to love a guy that played for the original Washington Senators. Any connection to the pre-expansion era was a plus for me. However, Topps did an interesting thing with Kaat's card the following year. The cards were nearly identical Compare: 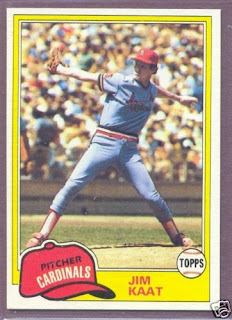 Something else....
Kaat was the last of the original Washington Senators to play in the major leagues. A ballpark complex in his hometown in Zeeland, Michigan bears his name.

On this date in 1980:
If you were settling in to sit down and watch Flo's farewell on "Alice" on CBS 30 years ago, this is what you would have seen.
Posted by Dean Family at 10:00 PM