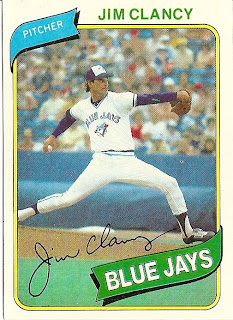 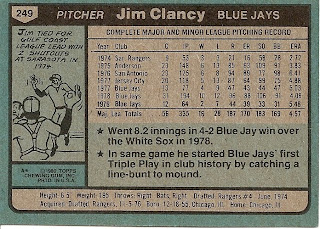 Who is this player?
Jim Clancy, starting pitcher, Toronto Blue Jays
Entering the 1980 season, Jim Clancy's role on the Toronto Blue Jays pitching staff was unclear. Coming off of an injury that ruined his 1979 campaign, Clancy responded by leading the club in nearly every pitching category. He won 13 games, completed 15 and recorded a 3.30 ERA, good for tenth in the American League. Clancy also led the league in walks with 128. At the end of the season, the Toronto baseball writers voted him pitcher of the year.

In the early days of the Toronto Blue Jays franchise, one of the names synonymous with the club was Jim Clancy. The durable righthander was a cornerstone of the early Blue Jays' pitching rotation along with Dave Stieb. He was originally drafted by the Texas Rangers out of St. Rita High School in Illinois in 1974. He struggled in the Rangers chain and was left unprotected in the expansion draft and selected by Toronto with their third pick.

Clancy made his major league debut in that inaugural season and made the starting rotation in 1978. He would remain there for the next 11 years. Jim had his best season in 1982 where he was named to the AL All Star team and received a nice hand from the Canadian crowd in Montreal. He pitched a perfect inning in the American League's 4-1 loss. Clancy finished the year with a league-leading 40 games started and a career high 16 wins.

Throughout his Toronto career, he Clancy seemed to alternate between some very solid seasons with sub par performances. For example, after a 15-win season in 1983, he posted a 5.12 ERA and losing record in 1984. Injuries limited him in 1985, the year the Jays advanced to the ALCS before losing in seven games. He helped the Blue Jays remain in contention throughout the decade, but the team was often on the short end when it came to winning the division. His final season with Toronto was 1988 and when he left via free agency, he was the team career leader in victories, games and innings pitched.

He signed with the Houston Astros but was in a season-long slump as he finished 7-14 with an ERA over 5.00. Clancy split time between starting and working out of the bullpen in 1990, where he struggled with a 2-8 record and a 6.51 ERA, and had a stint in the minor leagues. In 1991, Clancy was effective in relief and was traded to the Atlanta Braves for the stretch drive. Jim was one of several veterans used by the Braves to help bolster the bullpen. He appeared in the World Series that fall, earning a win in Game Three. Even though the Braves would lose that classic Series, it would serve as the final appearances of Clancy's 15-year career.

Why I love this card
July 5, 1980. Saturday afternoon at Tiger Stadium. A trip to the ballpark was always special and with the Tigers playing the lowly Blue Jays a victory seemed certain. After all, the Jays were a last place club and I had never heard of most of these guys, including Clancy. Instead he ruined our plans by pitching 7.2 strong innings to earn the win. In 30 career starts against Detroit, Jim was 4-17 and I was fortunate enough to be there for one of them. In retrospect, that doesn't seem as bad as I remembered.

Something else....
The 1991 Braves went through a bunch of guys at the end of their careers to help out in their bullpen. Juan Berenguer was their closer and went down in the summer with an injury. The Braves tried replacing him at various times with Clancy, Dan Petry, Doug Sisk and even the returning Rick Mahler before finally settling on Alejandro Pena. For all the success that the Braves enjoyed with their starting pitchers, they never could quite find the same fortune at the back end of the bullpen.

On this date....
Much has been made of the the 30th anniversary of the "Miracle on Ice" hockey game at the 1980 Olympics. One of the specials shown this week quoted captain Mike Eruzione as saying that people still come up to him and recall in vivid detail where they were when the USA beat the Soviet Union. He goes on to say that most moments like that are sad (Pearl Harbor, 9-11, JFK, Challenger) and that he doesn't know of any other sporting event that is shared in the same way. Indeed. May their legend continue to grow. Here is the ABC radio call, largely lost due to Al Michael's historic call on television. 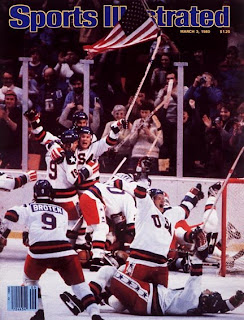