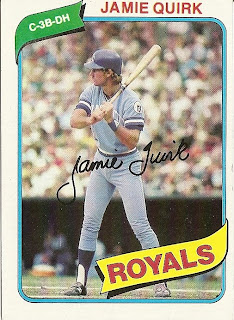 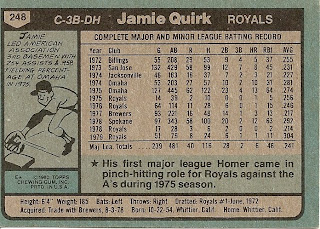 Who is this player?
Jamie Quirk, utility player, Kansas City Royals
Behind the plate for the Royals on Opening Day 1980 was Jamie Quirk who was filling in for Darrell Porter after the All-Star entered an alcohol treatment program. He did well at the plate, but in the first eight games Quirk allowed nine stolen bases and two passed balls. From there, he became George Brett's backup providing the future Hall of Famer a spell as Brett attempted to bat .400. A highlight came in August when Quirk went 4-4 with two home runs against the Toronto Blue Jays. The Royals advanced to the World Series in 1980, but Quirk did not appear in the postseason.

Born in Whittier, California, Quirk was a prep star that was originally slated to attend the University of Notre Dame on a football scholarship. When he was drafted by the Royals in 1972, Quirk opted instead for a baseball career. He would make his major league debut in 1975 and would spend the next 18 years in the major leagues. While noted for being an exceptional athlete and intelligent player, Quirk was never a regular, appearing in more than 100 games only once in his career.

The lefthanded batting Quirk played for eight teams during his major league career and played in two World Series, winning the championship with Kansas City in 1985. In the second half of his career, he became noted as a dangerous pinch-hitter. There is an interesting quirk on his playing record as he appeared in only four games in 1984. He spent most of the season as a coach in St. Louis before the Chicago White Sox inquired about his availability as a player. He went to the White Sox and resumed his active playing career.

He started a World Series game with the A's in 1990 and appeared in his last major league game in 1992. After failing to make the Cincinnati Reds roster in 1993, Jamie finally called it quits and got into coaching. Quirk has been on a major league roster ever since either as a bullpen or bench coach. He has been with the Royals (1994-2001), Rangers (2002) and Rockies (2003-2008) and even had an opportunity to manage. In November 2009, the Houston Astros hired him as a bullpen coach, where he will spend the 2010 season.

Why I love this card
The facimile autograph and the in-game action shot are two reasons to love this card, but in retrospect, that is not what warrants mention today. Quirk is one of those guys whose career began before I collected, was part of my peak years (80-88) and finished when I had stopped, when the cards all became glossy, foil stamped or UV coated. Indeed cards had come a long way from this issue to say Quirk's 1991 Stadium Club, but I was always more impressed with the older cards.

Something else....
Quirk's name was often mentioned in the early 2000s as a possible managerial candidate as he interviewed with the Rangers, Athletics, Blue Jays and Rockies. He did not get the top spot with any of those teams and remains hopeful of fulfilling his dream of one day being manager of the Royals.

On this date in 1980:
There's a one-day only coats and suits sale at Sears! See the commerical here.
Posted by Dean Family at 10:55 PM