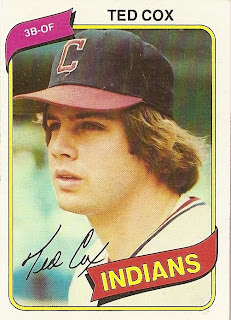 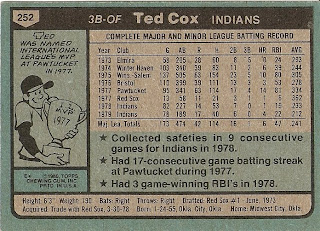 Who is this player?
Ted Cox, utility, Cleveland Indians
When the 1980 season began, Ted Cox was beginning a new chapter in his major league career. Traded to the Seattle Mariners in December, 1979, the righthand hitting Cox was hoping to win the third base job in the Queen City. He won the job after a good Spring Training and had two RBI in the Mariners' Opening Day victory over the Oakland A's. From there, however, Cox went into a terrible slump in April and began splitting time with Bill Stein. Ted had career highs in many categories and a highlight came on April 9 when Cox became the first designated hitter to collect a game-winning RBI. This statistic that was new in 1980 and only official from until 1988.

Today, Ted Cox is best known as holding the record for most consecutive hits from start of career. Called to the major leagues by the Boston Red Sox in late 1977, his first game was a 4-4 performance against the Baltimore Orioles and two more against the New York Yankees. His second hit was a swinging bunt single that resulted in a close play at first. Cox told an interviewer:

"The first-base ump called me safe and Earl Weaver came storming out of the dugout to argue the call," Cox said. "I watched the argument and said to myself: 'Wow, that's Earl Weaver. This is great.'"

Cox was the Red Sox first-round draft choice out of high school in 1973. He climbed the minor-league ladder in the Red Sox system, and was International League MVP with Pawtucket in 1977. Unfortunately, he was unable to find a spot with the parent club at that time since the squad was deep with hitters. After his record-setting start, he drew attention from around the league and the Red Sox used that to acquire pitching. They package Cox along with three other players to the Cleveland Indians for future Hall of Famer Dennis Eckersley.

In two seasons in Cleveland, Ted was unable to earn regular playing time and served primarily as a backup infielder and outfielder. After batting only .212 in 1979 with the Tribe, he was traded to the Seattle Mariners. Cox only spent one year in Seattle as he was released near the end of Spring Training in 1981. After the 1981 Player's Strike, he appeared in a handful of game with the Toronto Blue Jays, the last of his five-year career.

Since, Cox was selected the United States Specialty Sports Association Oklahoma State Baseball Director in 1997. He has since been made a USSSA national committee member and consulted with several other state directors, helping them to get the program started in their states. Ted has also worked with the Oklahoma Sports Museum and the Major League Baseball Players Alumni Association.

Why I love this card
I don't know why, but even today, I preferred this Indians cap over the Chief Wahoo logo. I realize that I have said in past posts that I am not fond of straight headshots but this photo of Cox shows the cap in all its glory. I was always jealous of those little leagues that used the MLB replicas and a friend at school had this hat through his league. Unfortunately, my little league had teams like "Eagles" or "Hawks" which to me was just wrong. One year, I played for the Yankees and our uniforms were green! Plain wrong.

Something else....
This is the third card in a row in which the players' first and last name are both one syllable. Also, Cox and Kip Young were both briefly teammates on the 1980 Seattle Mariners, even though neither one is pictured as a Mariner.

On this date in 1980:
The Notre Dame Fighting Irish ends DePaul's twenty-five game basketball winning streak, as the Irish defeat the #1 ranked Blue Demons, 76-74, in double overtime at South Bend. Mark Aguirre of DePaul and Kelly Tripuka of Notre Dame were both the game's high scorers with 28 points.
Posted by Dean Family at 7:17 PM