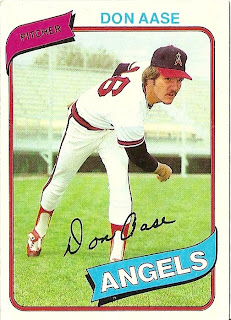 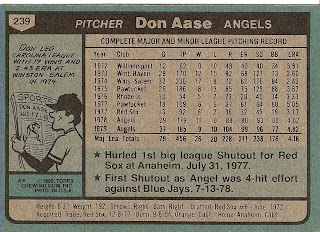 Who is this player?
Don Aase, starting pitcher, California Angels
Beset by injuries, the California Angels were unable to defend their AL West crown in 1980, slipping instead to sixth place. Righthanded pitcher Don Aase was one of the only healthy pitchers in Anaheim and he started and relieved, depending on the needs of the team. Aase started 21 games and was moved to the bullpen at mid-season. He was 3-0 and posted a 2.07 ERA in 19 appearances as a reliever, six of which were four innings or more.

The righthanded Aase was originally a selection of the Boston Red Sox in 1972. His professional career began dubiously as he went 0-10 with a 5.81 ERA with Williamsport and followed with a 15-loss season in 1973. However, Aase turned things around the following year as he was the best pitcher in the Carolina League, leading the circuit in wins, ERA and innings pitched. That performance earned him a promotion to Triple-A Pawtucket where he spent two seasons before earning a spot in the Boston rotation after the All-Star break in 1977.

Aase began his major league career with three straight wins, including a complete game shutout against the California Angels. He won six games, threw two shutouts and four complete games. However, the Red Sox traded Don to the Angels for Jerry Remy and won 11 games. He was a major part of the AL West division champions in 1979 and won the first postseason game in franchise history when he won Game 3 of the ALCS against the Baltimore Orioles.

He became the Angels closer in 1981 and spent the remainder of his career pitching out of the bullpen. An elbow injury in 1982 cost him almost two full seasons but Aase rebounded nicely, returning in 1984 to record 8 saves with a 1.62 ERA in 23 appearances. He became a free agent and signed with the Baltimore Orioles prior to the 1985 season. Installed as the Orioles closer, Aase was an All Star in 1986 and earned the save in the AL's win in Houston. He finished the year with 34 saves, the second most in the American League.

Injuries returned in 1987 and Aase never regained closer status, bouncing to three teams in the last four seasons of his 13-year career. He ended his career following stints with the New York Mets in 1989 and the Los Angeles Dodgers in 1990. Of all of the players in major league history, Don is listed fourth alphabetically behind David Aardsma, Hank Aaron, and Tommie Aaron. Today, Aase is enjoying retirement and his son is playing baseball for UNLV.

Why I love this card
When I first got this card, I first thought that Aase was photographed picking something up off the ground. The football stands in the background also reminded me of the local high school stadium. Today, I realize that this photo was likely taken in 1978 since the Angels had names on the back of their uniforms in 1979.

Something else....
Until today, I never knew that the correct pronunciation is AW-see. When I was a kid, I pronounced it ASS-ee, simply because it was a cheap reason to say "ass." My dad saw right through that. Since then, I had been pronouncing it Ah-see. Shows what I know.

On this day in 1980:
Today would have been the final day of the Star Trek Meal at McDonald's a cross promotion of Star Trek: The Movie. You can watch the commercial here. Notice that it is not called a Happy Meal - I think that this may be one of the first examples of a movie-themed combination at McDonald's.
Posted by Dean Family at 11:11 PM