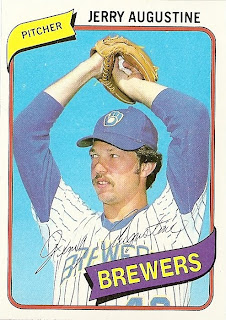 Who is this player?
Jerry Augustine, relief pitcher, Milwaukee Brewers
As the 1980 season began, most experts predicted that the Milwaukee Brewers would win their first division title. Relief pitcher Jerry Augustine had been rewarded with a long term contract and was supposed to be the ace of the bullpen. Somewhere, however, his effectiveness in this role seemed to disappear. He finished April with an ERA over 5.00 and opposing batters hit at a .331 clip against him with runners on base. Augustine's performance was one of the reasons the Brewers pursued a big-name relief pitcher in the free agent market, notably Rollie Fingers.

A strong-armed lefthander from Kewaunee, Wisconsin, Augustine was selected by the hometown Brewers on the 15th round of the 1974 amatuer draft. Within a year he had been promoted to Milwaukee for a September look and inserted into the starting rotation in 1976. Armed with a good curveball, Augustine was voted as the lefthanded starting pitcher on the Topps Rookie All-Star team and was the Brewers' Rookie of the Year. In 1977, Jerry was the team's top winner and also led the club in complete games and had his best season as a starter the following year, winning 13 games. In three seasons in the Brewers starting rotation, Augustine won 34 games.

Moved to the bullpen in 1979, he set a personal high in winning percentage and posted a 0.95 ERA during the seven weeks of the season. He also earned five wins during that stretch and the Milwaukee brass was convinced he was the answer to the team's question mark in the bullpen. When Fingers joined the club in 1981, Augustine was moved to a setup man and was part of the club that won a postseason birth in 1981 & 1982. Unfortunately, while part of the team, Augustine did not make a postseason appearance in either of those years.

During the last two full seasons of his career, Jerry was inconsistent and finished both the 1982 and 1983 seasons with an ERA over 5.00. At the start of the 1984 season, he was sent to the minors and the career Milwaukee Brewer played his tenth and final major league season. He spent the next two years in the minor league chains of five clubs and retired after the 1986 season. In the winter of that year, he opened Jerry Augustine Insurance in West Allis, Wisconsin and is still in the insurance business today.

He returned to his alma mater (University of Wisconsin-Milwaukee) in 1995 as head baseball coach. Jerry spent 12 seasons as the Panthers' coach, where he won coach of the year twice and Panthers qualified for the NCAA tournament in 2001, finishing second in the country in batting.

Why I love this card
Augustine had the look on his face that someone was about the jump out from behind him and scare the dickens out of him. In addition to collecting baseball cards, that was also one of our favorite hobbies as a kid, scaring people when we could. That came to an abrupt end when we scared my Dad one day hiding in the garage. He let us know in no uncertain terms that our days of jumping out from behind things yelling "Boo!!" were over.

Something else....
Augustine is responsible for turning around the baseball program at UW-Milwaukee. He won 315 games during his tenure, and in 1999 provided one of the most stunning upsets in recent college baseball history when the Panthers defeated the #1 seed Rice University during the tournament.

On this date in 1980:
The XIII Winter Olympics open in Lake Placid, New York. I remember getting some of these sticker sheets from Kellogg's cereal. My grandma always had Special K and I think that's how I wound up with these: 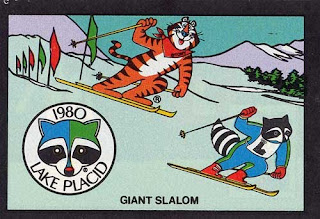 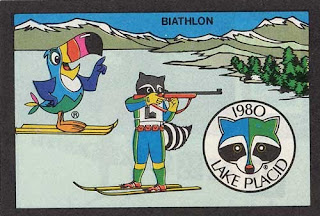 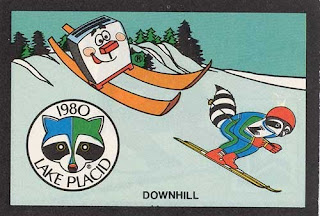