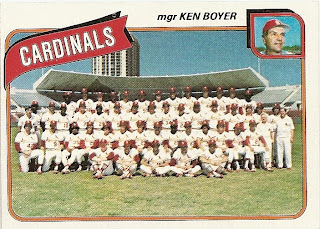 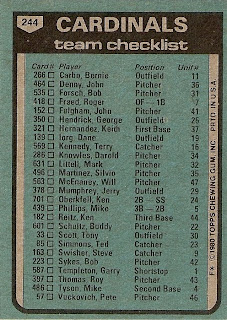 The St. Louis Cardinals were a team in transition in 1980 as the Lou Brock era had come to an end in 1979. The Cardinals won 86 games in '79 finishing a promising third behind Pittsburgh and Montreal. The Cardinals were seen as a team with a fine core of young and exciting players. Shortstop Garry Templeton was one of the fastest men in the game, a proven All-Star player and .300 hitter. First baseman Keith Hernandez was a Gold Glove winner and the defending batting champion and Most Valuable Player. Ted Simmons was considered the best catcher in the league not named Bench and George Hendrick was steady and excellent in the clutch.

If the Cardinals had a weakness, it was generally thought that it may have been their pitching. The Cards did not have a dominant "fireman" in a bullpen consisting of journeymen and veterans. There were some bright spots in the starting rotation, notably Bob Forsch and Pete Vuckovich, dependable if unspectacular.

The Cardinals began the season under manager Ken Boyer who was entering his third season as St. Louis' skipper. Injuries decimated the pitching staff and the Cards struggled early in the season and they found themselves in last place by early June. Boyer was fired on June 8th and replaced by Whitey Herzog, formerly of the Kansas City Royals. Herzog managed the team for two months before being promoted to GM, turning the reigns over to Red Schoendienst to finish out the 1980 season.

St. Louis played .500 ball the rest of the way, to finish 74-88, in fourth place, 17 games behind Philadelphia. In October, it was announced that Herzog would be GM and field manager, and he began rebuilding the Cardinals immediately. The series of moves that Herzog would make at the 1980 Winter Meetings would set the stage for the team that would win three National League pennants in the decade and become World Champions in 1982.

Why I love this card
This card was one of my "white whales" of the 1980 set. I never did get a Cardinals team card that season and for some reason, neither did my normal trading partners. It wouldn't be until 1987 that I would get a nice version of this card at Nostalgia Nook one of the first card/comic stores that I can remember. The store has been gone 20 years but every time I drive by that store I think of this card and a 1978 Dave Concepcion, but that's another story.

Something else....
This was Ken Boyer's final card before his premature death at 51 years of age from cancer in 1982.

On this date in 1980:
Wayne Gretzky of the Edmonton Oilers sets an NHL record when he records 7 assists in a game against the Washington Capitals. The Oilers would finish the season with a losing record, but qualified for the playoffs, where they were swept by the Philadelphia Flyers.
Posted by Dean Family at 7:58 PM