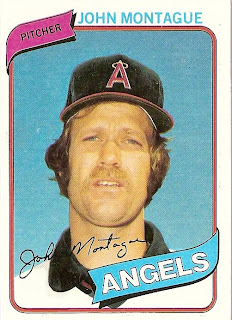 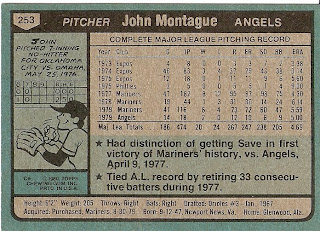 Who is this player?
John Montague, relief pitcher, California Angels
In what would be the final year of his seven-year major league career, John Montague of the California Angels was very effective to start the 1980 season. He earned two saves the first month and was the most reliable setup man on the Angels' staff. However, he had a rough second half and had a 11.25 ERA in August. Like many Angels that year, he became injured and missed the last month of the season. The righthanded Montague finished the year 4-2 with three saves and a 5.13 ERA.

A native of Newport News, Virgina, John Montague played college baseball at Old Dominion University and was selected by the Baltimore Orioles in the third round of the 1967 amateur draft. He spent several years pitching in the Orioles system and was traded to the Montreal Expos in April, 1973. He made his major league debut that year but spent his Expo career shuttling between Quebec and the minor leagues. Unable to find a consistent role for him, Montreal released Montague at the end of the 1975 season.

He was quickly signed by the Philadelphia Phillies, with whom he made only three appearances. John again was assigned to the minor leagues in 1976, where he won 14 games and was named American Association Pitcher of the Year. This caught the eyes of the expansion Seattle Mariners, who selected John to be a member of the inaugural team in 1977. He was team's first ever relief pitcher and earned the first save in Mariner history on April 9, 1977.

Montague saw some action as a starting pitcher, but made history as a reliever. He set an American League record in mid-season when he retired 33 consectutive batters. He finished second on the team in wins, appearances and innings pitched. Montague was sidelined with hip pain in 1978; a benign tumor was found and removed after the season. He was traded to the Angels in late August of 1979 and won two games and saved five, playing a key role in the Halos division title.

He appeared in the postseason for the only time in his career and allowed the famous home run to John Lowenstein in the 12th inning of Game 1. The Angels would lose the ALCS to Baltimore in four games. He was released in Spring Training of 1981 and was not picked up by another team. Any information on his current whereabouts would be most appreciated.

Why I love this card
There are not many blatant example of airbrushing in the 1980 set. Airbrushing was a staple of many Topps sets over the years, but so far there haven't been any really obvious ones. Montague's card, however, falls into that category, as it appears Topps used a picture from earlier years. Case in point, here is Montague's 1979 card:

Here's some pertient parts of that card up close:

Compare this with the 1980 Montague card and it appears that the shots were taken on the same day, down to the cloudless blue sky.

Something else....
Montague's record was actually shared with Royals' hurler Steve Busby who accomplished the feat in 1974. The record has since been broken and is held by Mark Buehrle. He retired 45 consecutive batters in 2009. The National League record belongs to Jim Barr of the San Francisco Giants who retired 41 straight batters in 1972.

On this day in 1980:
Musical theme today: Dizzy Gillespe appeared on the Muppet Show, Pink Floyd performed at Nassau Colisuem and Queen had the #1 song in the country with "A Crazy Little Thing Called Love."
Posted by Dean Family at 8:30 PM