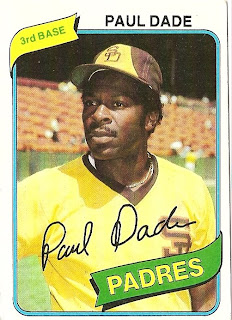 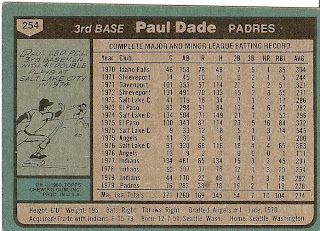 Who is this player?
Paul Dade, utility player, San Diego Padres
As the 1980 season wound down, so did Paul Dade's six year major league career. In his second campaign with the Padres, Dade saw limited action playing primarily as a reserve. The season was a struggle for Dade as he batted only .189 in 68 games and he made four errors in only 26 chances in the field. He was tried in several different positions with the Padres all with little success. In December, the Padres gave Paul his unconditional release.

An outstanding high school player at Nathan Hale High School in Seattle, the righthand hitting Dade twice was the top high school batsman in the state. With the build more akin to a football player, Dade was considered a top prospect when the Angels drafted him with the 10th pick of the 1970 amateur draft. He signed for $60,000 and bought his mother a home before reporting for minor league duty. The Angels hoped that he would man third base in the coming years.

Paul made his major league debut in 1975 but received little playing time with the Angels. He led the PCL in defensive categories and was the league's batting champion in 1976. In the early days of free agency, Dade was allowed to negotiate a contract and signed with the Cleveland Indians for 1977. With Buddy Bell established at third, Dade was moved to the outfield and he performed well in his first season as a regular. Appearing in 134 games he batted .291 and was even assigned a Kellogg's baseball card based on his performance. The following year, however, the Indians traded him to the San Diego Padres for Mike Hargrove.

He never found regular playing time in San Diego and signed to play in Japan in 1981. Paul was released at midseason by the Hanshin Tigers for arguing with the manager over playing time. His playing career ended in the minors in 1982, when he was let go at midseason by the Portland Beavers. Today, Paul lives a modest life in his home state, working for box making company. Like most folks, he is living to make ends meet for his family and is far removed from the major league life.

Why I love this card
I had seven Paul Dade cards at one point. I stress had since I got curious at one point and wanted to see what would happen if you ran over a card with a lawnmower. This Dade card was the unfortunate choice. The results were predictable. The lawnmower won. No wonder I had so many Dade cards, this was a double printed card and we haven't seen one in a while.

Something else....
We've had a stretch where three of the last four guys saw their major league careers over by the end of 1980. Throw in Ted Cox and all of them were done by 1981. After longtime veterans Phil Niekro, Jim Kaat and Jim Clancy, the pendulum has swung the other way.

On this date in 1980:
The San Antonio Spurs fired coach Doug Moe as the Spurs struggled to reach .500. Moe would land in Denver, where he would coach the Nuggets for ten seasons.
Posted by Dean Family at 9:15 PM