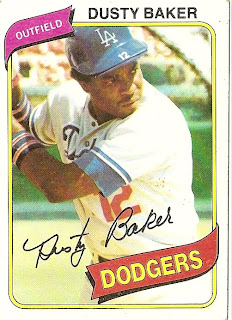 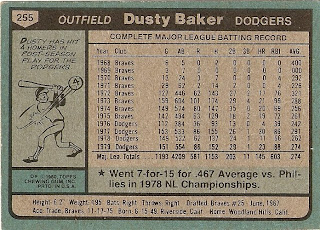 Who is this player?
Dusty Baker, leftfielder, Los Angeles Dodgers
In 1980, Dusty Baker had what can be considered the best season of his career. He was consistently the Dodgers most reliable clutch hitter and his omission from the All-Star team sparked outrage from his teammates. He continued his productive hitting in the second half and was awarded the Silver Slugger Award for his .294/29/97 performance. With the season over, his name was mentioned in trade rumors for the Red Sox' Fred Lynn, instead he signed a five year contract worth four million dollars.

The current manager of the Cincinnati Reds, Dusty was born Johnnie B. Baker, Jr. in Riverside, California. He was drafted by the Atlanta Braves in 1967 and made his major league debut the following year at the age of 19. He was initially compared to teammate Hank Aaron, who Baker acknowledged as a major influence on his career. Dusty had several cups of coffee over the next three seasons and was a .300 lifetime hitter in the minors.

He became a regular in 1973, batting an impressive .321, good for third in the league. The following season, he was the on-deck hitter when Aaron hit his record breaking 715 home run and he improved on his power numbers. Baker and the Braves slipped to mediocrity and he was part of a package trade with the Los Angeles Dodgers after the 1975 season. It was with the Dodgers where Baker would earn his greatest fame as a player.

The right hitting Baker was a fixture in LA for the next eight years as the Dodgers went to the World Series three times, winning in 1981. Baker was twice an All-Star, won his only career Gold Glove and was a legitimate MVP candidate. He spent the remainder of his 19-year career in the Bay area, playing with the San Francisco Giants in 1984 and the Oakland A's from 1985-86.

He spent several years as a Giant coach before being named manager in 1993. Despite earning four playoff appearances, Baker's managerial career has been marked by near misses, specifically 1993 and 2003. He has also earned a reputation for employing unconventional strategy. He is noted for rejecting the importance of on-base percentage and is criticized for overusing Cub pitchers Mark Prior and Kerry Wood. He will be beginning his third season as Red skipper in 2010, his 17th season as a major league manager.

Why I love this card
As a kid, how can you not love a player named Dusty?

Something else....
Several days after signing his five-year deal with the Dodgers in 1980, Baker surprised two prowlers at his home, detaining one before calling the police. Now that's pretty bad ass.

On this date in 1980:
Last mention of the Winter Olympics, on this date, the iconic photograph of the US Olympic team made the cover of Sports Illustrated.
Posted by Dean Family at 11:19 PM