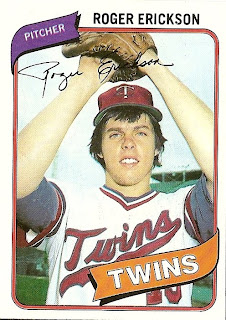 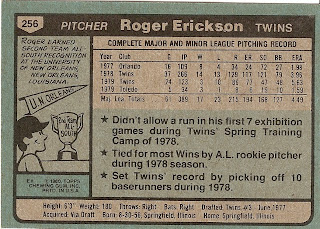 Who is this player?
Roger Erickson, starting pitcher, Minnesota Twins
Despite posting only a 7-13 record in 1980, Roger Erickson was victimized by poor run support throughout the season. The 23-year old righthander consistently had an ERA under 3.00 during the first half, but only won three games. He finished 8th in the American League with a 3.25 ERA. At that moment, he was regarded as the one pitcher on the Twins with the most potential and someone the Twins were looking to build their rotation around.

Erickson made quite an impact on the baseball world in his debut season in 1978. In only his second professional season, the Springfield, IL native was inserted in the Twins starting rotation. He responded with the best season in his six-year major league career, winning 14 games and ranking among the league leaders in innings pitched and games started. Roger even ilicited comparisions to another recent rookie phenom, Mark Fidrych. The local media reported Erickson's quirks as much as his talent in an effort to create a similar sensation. It was even described that Erickson "talked" to his arm on the mound.

Alas, also like Fidrych, Erickson was troubled by numerous injuries, beginning in 1979. He stuggled that year and it was later discovered that he needed elbow surgery when the season was over. He pitched decently in 1981, but the light-hitting Twins were unable to again provide him with much run support and he finished the strike-shortened year with a losing record. Like many Twins before him, he was traded the following season by frugal owner Calvin Griffith who had a history of moving any high priced talent to other teams.

Now with the Yankees, Erickson again began to suffer injuries that would eventually end his career. When he was demoted to the minors in 1983, he refused to report and left the Yankees altogehter. He eventually returned to New York and accepted a position with Triple-A Columbus. He would spend the remainder of the 1980s in with several organizations, but did not return to the major leagues.

Why I love this card
When I was a kid, I thought that all baseball player's bedrooms were like the one depicted here. With a pennant and a trophy prominantly displayed, it had that Richie Cunningham vibe that I completely bought into.

Something else....
Any information on Erickson's whereabouts today would be appreciated.

On this date in 1980:
A jury in Winamac, Ind., found the Ford Motor Co. not guilty of reckless homicide in a case involving the deaths of three teenage girls. All three were killed in August 1978 when the Pinto subcompact in which they were riding burst into flames after it was struck from behind by a van. The prosecution claimed Ford knew of a design defect in the Pinto but failed to correct it.
Posted by Dean Family at 9:00 AM