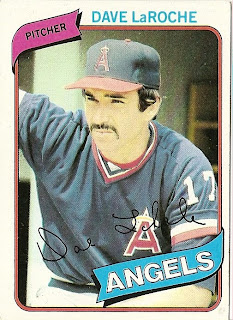 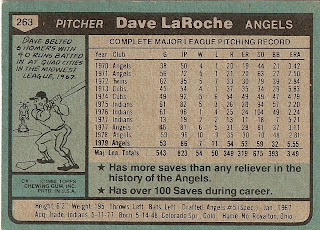 Who is this player?
Dave LaRoche, relief pitcher, California Angels
After several seasons as the Angels' leading fireman, Dave LaRoche had settled into a different role with the team as the 1980 season got underway. Being used primarily as a setup man, LaRoche excelled during the first half of the season earning and handful of saves and posting an ERA near 3.00. Injuries to the Angels pitching staff led to the lefthanded LaRoche getting more work and he was moved into the starting rotation. A rocky August saw him go 1-3 with a 6.23 ERA, but was effective when returned to the bullpen to close out the season. In his final appearance of the year, he introduced an eephus pitch, one he would later call "La Lob".

An All-League pick in three sports in high school, Dave LaRoche helped lead his Colorado team to the Connie Mack World Series title. Signed originally as an outfielder by the Angels in 1967, he was converted into an pitcher the following year and quickly made his major league debut, in 1970. In his first appearance, he came in to face Boston legend Carl Yastrzemski in the 16th inning and end a Red Sox threat. He earned the win when the Angels pushed across a run in the bottom half of the inning.

As the role of closer (or "fireman" as it was called at the time) evolved, LaRoche was one of the better relievers of the 1970s. However, since he spent that time with second division clubs (Angels, Cubs, Twins and Indians) much of his work went unnoticed. A two-time All-Star with Cleveland, LaRoche averaged 12 saves a year during the decade and five times finished the season with an ERA under 3.00. He was consistently among the league leaders in appearances, games finished and saves, twice finishing second in that category (1976, 1978).

Dave also earned the stereotypical reputation of lefthanded flake for antics throughout his career. He once almost missed a team flight after running out of gas and another time hit the scoreboard at Anaheim Stadium with a ball to show a coach he was loose. He remains the last pitcher to use the eephus pitch on several occasions, inducing a friendly exchange with Milwaukee's Gorman Thomas in the process.

LaRoche was released by the Angels in Spring Training in 1981 and he was quickly scooped up by the New York Yankees. He spent the final three seasons of his 14-year career in New York where he was popular with the fans. Since 1984, Dave has served in a coaching capacity, twice at the major league level with the White Sox and Mets. Today, he is the pitching coach of the Triple-A Las Vegas 51s in the Toronto organization. His sons Adam and Andy are both currently in the major leagues, at one point teammates in 2009 with the Pittsburgh Pirates.

Why I love this card
In previous posts, I talked about a visit to Tiger Stadium in 1980 where I got some autographs of the visiting Angels. LaRoche was one of the guys who signed for me and he looked exactly as he did on this card. He was wearing a similar warmup and had the same look on his face. Even when his sons are on TV today, I think of the moment that he signed for me in 1980 (here, along with Richie Hebner) 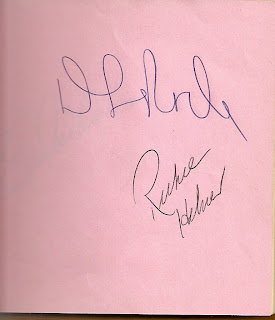 Something else....
According to LaRoche's wikipedia page, he once got into a tussle with Hall of Famer Rod Carew:

(LaRoche) "complained about everything. In fact, they filed a grievance about the choice of ice cream we had in the clubhouse. [He] loved to agitate, and it was not right. He was always negative about everything in the locker room. I finally got tired of it one night...we were having a team meeting and he was constantly interrupting people. I said to him, 'Just shut up and listen to what the guys have to say.' He asked what I was going to do about it, so I challenged him to a fight. There was a broom closet in the back of the clubhouse. I opened its door, turned on the light and said, 'Come on, let's go in.' As soon as he walked in, I turned off the light, closed the door and whaled away at him."

On this date in 1980:
"Silver Thursday" A steep fall in silver prices led to panic on commodity and futures exchanges.
Posted by Dean Family at 1:31 PM