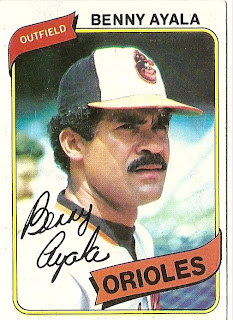 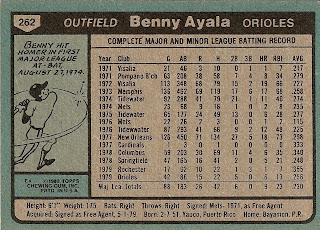 Who is this player?
Benny Ayala, designated hitter/reserve outfielder, Baltimore Orioles
Receiving the most playing time of his career in 1980, Benny Ayala achieved career highs in nearly every offensive category. Playing initially only against lefthanded pitching, Ayala blistered the ball in the first half; at one point seeing his average reach .357. Although he did not continue his torrid pace, Ayala earned more playing time at the corner outfield positions and hit two pinch-hit homers for the Birds and three game winning RBI.

In his first ever at-bat in the major leagues, the righthanded hitting Ayala hit a home run for the New York Mets. However, it would take him five seasons to earn a permanent spot on a major league roster. Born in Yauco, Puerto Rico, he was signed as a amateur free agent by the Mets in 1971 and made his debut three seasons later. He played a handful of games for the Mets in both 1974 and 1975 but did not return to the major leagues with New York.

Traded to the St. Louis Cardinals in 1977, he appeared in only one major league game and getting a hit off of future Hall of Famer Steve Carlton. Again, he did not return to the major leagues and the Cardinals shipped him to Baltimore in January, 1979. He was purchased from Triple-A Rochester on April 30th and responded with the 3rd best slugging percentage on the club (.523) as the O's won the American League pennant. Ayala played in four games during the World Series that year, clubbing a home run in Baltimore's Game 3 victory.

Ayala would be one of the primary role players in a successful era for Baltimore. Twice appearing in the post-season, Ayala was a .429 batter and helped lead the Orioles to a 1983 World Series championship. Also during this period, the Orioles came close to two more division titles, winning 100 games in 1980 only to fall short to New York and losing the title on the last day of the 1982 season to Milwaukee. Ayala was there to provide a clutch hit off the bench or a formidable bat against the American League's toughest lefthanded pitchers.

When his batting average dipped to .212 in 1984, the Orioles did not renew his contract and he caught on with the Cleveland Indians for his tenth and final season in 1985. In December 2009, Grey Flannel Auctions featured several items obtained directly from Ayala, including several World Series worn items and his 1983 World Series ring.

Why I love this card
I always respected guys like Ayala. I think it may be because Topps included their minor league record on the back and it made me appreciate the long journey to majors. To see all these stops along the way, in cities that I wasn't familiar with somehow made the players seem more personal. Also, in researching this post, I came across a "signed" Ayala card with a signature most different from the facimilie one on the 1980 issue.

Something else....
I could not find any information on the circumstances that led to Ayala parting with his World Series ring. I can't imagine why anyone would do that, but who knows? If anyone has any information to share, I would appreciate it.