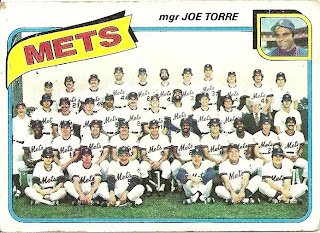 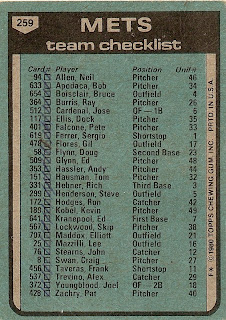 Current Los Angeles Dodger manager Joe Torre was beginning his fourth season as Mets' skipper. Hard to imagine that when this card came out that Torre would compile a Hall of Fame resume as manager, famously of the New York Yankees. He also led the Atlanta Braves and Dodgers to postseason appearances.

A year after posting the worst record in the National League, the New York Mets were sold on January 24, 1980 for an estimated $22 million (the largest amount ever paid for a ball club to that point). Shortly thereafter, longtime Baltimore Orioles' GM Frank Cashen was hired to run Mets. Rarely can a team that lost 95 games claim it was a successful season, but the Mets did improve in 1980. They moved up a place in the standings to fifth and drew nearly 600,000 more fans than the previous year. They hovered around .500 for most of the season until a free fall saw them lose 38 of their last 49 games.

There were several young players that led the Mets, most notably homegrown Lee Mazzilli. He was complimented by Gold Glove winner Doug Flynn, the promising Steve Henderson and All-Star John Stearns. On the mound, Craig Swan, Pat Zachary and Neil Allen held the most promise.

Several youngsters also made their debut in 1980, such as Hubie Brooks, Wally Backman and Mookie Wilson. Backman and Wilson would be important members of the 1986 World Champions. Future Cy Young winner Mike Scott and All-Star closer Jeff Reardon were also Mets in 1980, in the early stages of their careers.

However, the most important Met in 1980 would be their selection in the June amateur draft. With the #1 selection overall, the Mets chose a 18-year old outfielder from Los Angeles, Darryl Strawberry. Almost immediately, Strawberry would begin to evoke comparisons to Ted Williams and he would have a significant impact on the Mets' fortune as the decade wore on.

Why I love this card
Other than the fact that I haven't upgraded this card in 30 years, the white background here confused me. Much like the Chicago White Sox team card, there is a completely white background here. I can't imagine where this photo would have been taken, because I can't imagine an angle at Shea Stadium that would account for this. Must have been Spring Training, I guess.

On this date in 1980:
Bob Hope appears on the cover of Rolling Stone. Also in this issue is a in depth look at George Bush, the man who would become Vice President in 1980 and the eventual 41st President of the United States. He was still seeking the Republican nomination for President at this stage in 1980.
Posted by Dean Family at 7:04 PM