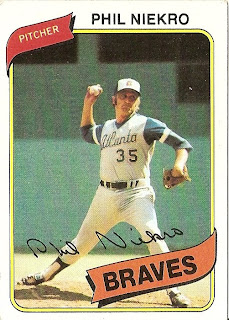 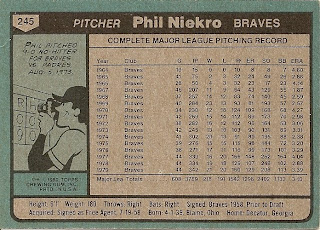 Who is this player?
Phil Niekro, starting pitcher, Atlanta Braves
Hall of Famer, Class of 1997
In March of 1980, Phil Niekro of the Atlanta Braves was honored with the Clemente Award for his work raising money and awareness for spina bifida. However, the veteran's season began slowly, losing his first four decisions and losing ten times before the All-Star break. The durable knuckleballer was nonetheless the cornerstone of the Braves pitching staff, leading the league with 38 games started. Phil also led the league in losses (18) and home runs allowed (30). He was rewarded after the season when he received his third of five Gold Glove Awards in his career.

A childhood friend of NBA Hall of Famer John Havilcek, Phil and his younger brother Joe learned the knuckleball at an early age from their father. Phil would make the knuckleball his signature pitch, en route to 318 career victories, starting with the Milwaukee Braves in 1964. He worked his way into the Braves starting rotation and in his first season as a starter (1967), led the National League in ERA. Two years later, he won 23 games as the Braves were the very first NL West Champions and qualified for the playoffs. Unfortunately, Niekro and the Braves lost in three straight to the eventual World Champion "Miracle" New York Mets.

Niekro would spend 20 years in Atlanta and was the teams' most recognizable player as the team slipped into mediocrity in the 1970s. He pitched a no-hitter in 1973 and four times led the league in innings pitched, each time topping over 300 innings. He twice led the league in victories and in 1979 became the first starting pitcher since Grover Cleveland Alexander in 1971 to start 44 games. "Knucksie" was so reliable that he averaged 38 starts and 288 innings pitched per season during the 1970s.

As the elder statesman, Phil helped lead "America's Team" to another division title in 1982 and led the league in winning percentage. At age 44, the Braves erred in thinking Niekro was at the end of his career and released him. He was quickly signed by the New York Yankees and was selected to the All-Star team in his first Yankee season. The following year, he won his 300th game, an 8-0 shutout on the final day of the 1985 season. It would be his final Yankee appearance.

Niekro bounced between Cleveland and Toronto for two seasons before returning home to the Atlanta Braves in 1987. It would make only one appearance for the Braves before finishing his 24-year career at the incredible age of 48. Even with 300 wins, Phil had to wait five years before finally achieving the honor of the Hall of Fame in 1997. Phil also famously managed the Colorado Silver Bullets, the all-female professional baseball team in the mid 1990s. Currently, Niekro is a member of the Kiz Toys Board of Advisors, lending his expertise on the company's baseball line.

Why I love this card
I remember looking at the back of this card and seeing that Niekro was older than my Dad. And it wasn't close, Phil had over two years on my Dad. Phil immediately had my respect at a young age for that reason alone. When I asked my Dad how come he wasn't in the majors when Phil was, the answer was simple. "I can't throw a knuckleball," was th reply.

Something else....
Phil also had a Burger King issue in 1980 (See below) as well as a Topps Super Card. The Burger King card is framed a little tighter (and better) than the regular set issue with all the extra background. Awesome red warmup jersey that Phil is sporting here, even if he has one of those trucker-mesh caps on.

On this date in 1980:
A total solar eclipse occurred on this particular day 30 years ago. It wasn't visible in the United States, but I do remember us talking about this in class. Invariably it led to playground discussion that you would go blind if you looked directly at an eclipse. 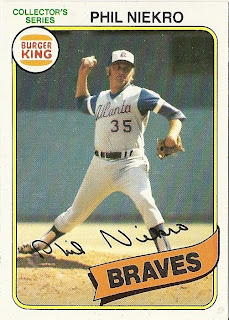 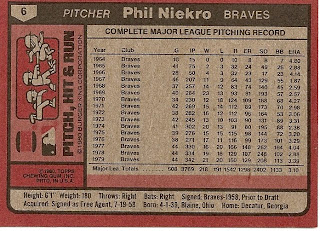 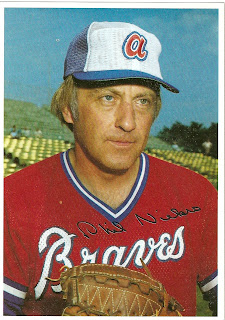 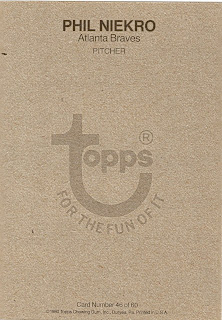