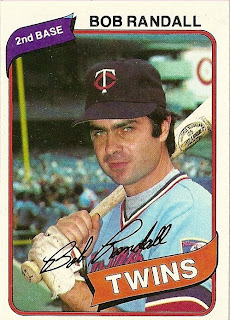 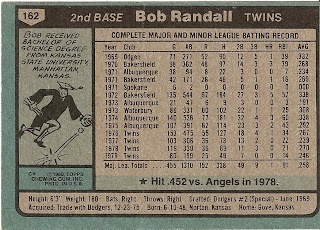 Who is this player?
Bob Randall, infielder, Minnesota Twins
As the 1980 season began, Bob Randall was released by the Minnesota Twins near the end of Spring Training. When he was not claimed by another team, he was signed by the team as a coach at Triple-A Toledo. Following an exhibition game between Toledo and the Twins in which Randall appeared and performed well, he was given another opportunity with the big club. He appeared in five games with the Twins, going 3-15 (.200) before being optioned out to Toledo for the remainder of the year. The glimmer of hope of those five games turned out to be the last gasp as his five-year major league career had come to an end.

A native of Gove, Kansas, the righthand hitting Randall attended Kansas State University on a dual athletic scholarship to play baseball and basketball. After playing one season of basketball, he concentrated solely on baseball and went on to post a career batting average of .371, which still ranks among the school's all-time bests. Randall received his degree in business and finance in 1970. Bob was drafted by the Los Angeles Dodgers three separate times before finally signing with the them when he was selected in the second round of the 1969 player draft.

Randall never played at the major league level with the Dodgers, toiling in the minor leagues for seven seasons. During that time, he led three different leagues in hits and even served as a player coach at Bakersfield in 1972. The depth of the great Dodger teams of the 1970s likely played a part in his inability to rise to the major league level. In December 1975, his career received a boost when he was traded to the Twins.

Upon his arrival in Minnesota, the Twins' legend Rod Carew switched positions to first base, creating an opening at second that Randall would fill. Randall beat out Jerry Terrell for the position in Spring Training, and Bob batted .267 in 153 games in 1976 while finishing 4th in the American League in sacrifice hits. That season would be the best of Randall's career. He would progressively lose playing time the next two years, even though he batted .270 in 1978. He lost his starting position to Rob Wilfong in 1979 and batted .246 in a reserve role. An excellent fielder and pure contact hitter, Randall averaged just one strikeout for every 13 at bats during his major league career.

After his playing days, Randall served as a baseball coach at Iowa State University from 1981-1994, the last eleven as their head coach. He moved on to the head coaching position at the University of Kansas from 1995-2002 and was the hitting coach for the Indianapolis Indians in the Milwaukee Brewers organization. Today, he is coaching at Manhattan Christian College, in Manhattan, Kansas.

Why I love this card
This card reminds me of silly things when I was a kid. Don't get me wrong, I am sure that Randall is a great guy. He signed an autograph for me several years ago and I was appreciative for that. He also signed it with a bible scripture underneath so he has his priorities in order. I'm sure he's a loving father and husband, so I don't mean this in any demeaning way.....but Randall's card scared the crap out of me. I'm not sure if it was the eyebrows, the semi-scowl or what, but it freaked me out and I tried to trade this card every time I got it.

Something else....
Randall is one of a handful of major leaguers to have over 1000 at bats with only one major league home run. However, as Randall told the New York Times in 2001:

''It didn't mean that much to me then, and it still doesn't now,'' said the 53-year-old University of Kansas baseball coach. ''I hit .255, so I wasn't a Bozo hitter, but that just was not my role. My philosophy was that it was better to hit .250 with no home runs than .220 with five. It was just a blessing to play in the big leagues at all. It's like what Freddie Patek said: 'I'd rather be the smallest player in the majors than the tallest in the minors.' ''