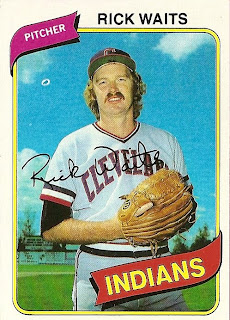 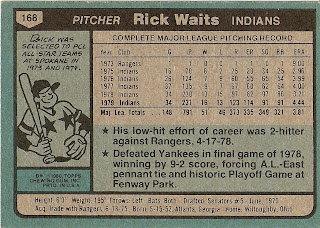 Who is this player?
Rick Waits, starting pitcher, Cleveland Indians
Having established himself as a reliable starting pitcher in the Indians rotation, Rick Waits was on the mound as Cleveland's starter in the home opener in front of the largest crowd of the season. His victory made him only the second Indian in club history (Bob Feller) to win the home opener two years in a row. Waits added a screwball and a slider to his repertoire and he finished the year with 13 victories. Also known for his singing abilities, Waits sang the national anthem on several occasions prior to the game and even appeared on The Today Show.

In his 12-year career, all in the American League, Waits never came close to playing for a contending team. He was signed by the Washington Senators in 1970, and made his debut with the Texas Rangers in 1973. He was traded to the Cleveland Indians in a deal that brought Gaylord Perry to Texas. He would spend nearly nine seasons in Cleveland as a dependable starting pitcher, six times making 20 or more starts.

Today, Waits is most known for his performance on the final day of the 1978 season. With the Indians long out of the AL East race, and his team in the middle of a seven-game losing streak, Waits was matched up against Catfish Hunter. If the Yankees won, they would clinch the AL East. His complete-game five-hitter defeated New York and forced a one game playoff against the Boston Red Sox. As New England watched, the scoreboard at Fenway famously proclaimed "Thank You Rick Waits!"

Waits followed that with perhaps his best season in 1979, when he won a career-high 16 games and finished sixth in the AL in shutouts. He would win 74 games in an Indian uniform, but his performance dropped two years in a row (1981 & 1982) mainly due to a knee injury. He was traded to the Milwaukee Brewers in June of 1983. After being traded to the Brewers, he injured his shoulder and was sent down to the Brewers' Triple A Vancouver. He was shuttled back and forth over the next two seasons, and he spent all of 1986 in Vancouver before being released at age 34.

In 1987, Rick traveled to Italy where he pitched for the Rimini Pirates baseball club and served as player-manager. Waits led the squad to the European Cup in 1989. He returned to the United States that fall to participate in the Senior Professional Baseball Association. When the league folded, he became a pitching coach with the New York Mets association for many years, and in 2009 was named the Mets' minor league pitching coordinator.

Why I love this card
It reminds me of sitting on my parents' porch trading cards. One of my buddies Ricky Carnaghi wasn't supposed to be out of the house because he did something I can't recall. He had all of his cards spread out (as we all did) as we proposed and rejected numerous proposals. He saw his mom coming down the street and quickly gathered all his cards and took off. He left some behind (including a Nolan Ryan we all wanted) until the rest of us yelled "Rick, Wait!" He kept on running home and didn't come back. When we asked him the next day, he thought the card we were holding up was this one. "I didn't care about that card," he said. Yes, we did give him back his Ryan but it cost him. I got a Richie Hebner in the deal.

Something else....
Today, Waits' 1978 performance has earned him the reputation of being a "Yankee Killer." However, Waits did not in fact perform that much better against the Yankees than normal. He had several no-decisions in his career against New York and lost to the Yankees three times in 1978.
Posted by Dean Family at 5:20 PM