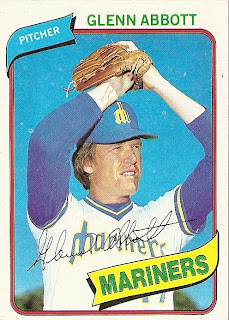 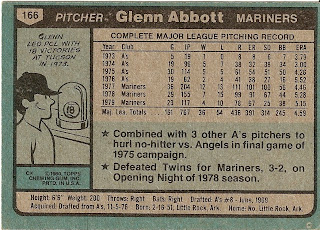 Who is this player?
Glenn Abbott, starting pitcher, Seattle Mariners
After a difficult season in 1979, Glenn Abbott was slated to be the fifth starter for the 1980 Seattle Mariners. In his first start of the season, Abbott pitched a complete game four-hitter defeating the Oakland A's. He won six of his first eight decisions and became the Mariners most reliable starter. While Seattle lost 103 games, Abbott finished the season with a 12-12 record, leading the team in victories and shutouts.

Originally drafted in 1969 by the Oakland Athletics, Abbott was a righthanded pitcher out of the University of Central Arkansas. He made his major league debut in 1973 while the A's were in the midst of one of the greatest runs in baseball history. Even though he did not appear in the postseason in 1973 & 1974, Abbott figured to play a prominent role in the A's continued success.

In 1975, the A's again won the AL West and Abbott pitched in the ALCS as Oakland fell to the Boston Red Sox. A highlight came in September when Abbott teamed with Vida Blue, Paul Lindblad and Rollie Fingers to pitch a no-hitter against the California Angels on the final day of the season. Following a poor performance in 1976, the A's left him unprotected in the expansion draft and he was selected by the Seattle Mariners.

Abbott would spend seven seasons as a Mariner, experiencing highs and lows. He set many of the early Mariners pitching marks, but missed significant time due to bone chips in his elbow, meningitis and tendinitis. When Spring Training opened in 1983, Abbott was the only original Mariner player still around. In August, he was sold to the Detroit Tigers for the stretch drive and went 2-1 with a 1.93 ERA. Abbott was slated to be the #4 starter for the Tigers in 1984 and was part of the team that began a record 35-5. He pitched poorly in limited action and was released, making 1984 his 11th and final big league campaign.

After his playing days ended, he has spent over 10 years as a minor league pitching coach, most recently with the Porland Beavers of the San Diego Padres organization. During his career he coached future major leaguers Jeremy Bonderman, Tim Hudson and Barry Zito.

Why I love this card
I liked the windup pose that was a staple of baseball cards throughout this era. Sure it was staged and fake, but I didn't mind. I liked this pose, but Abbott must have loved it. He not only posed that way in 1980, but three other times as well:

"I kept losing weight and didn't have any energy," he said. "I was in bed for about three weeks and the doctors thought it was just a virus. But I kept having bad headaches, blurred vision and lost some of my hearing. I lost something like 30 pounds. One doctor thought I had multiple sclerosis."

Obviously, Abbott returned to the major leagues, but lost 20% of his hearing in his left ear.
Posted by Dean Family at 11:08 PM