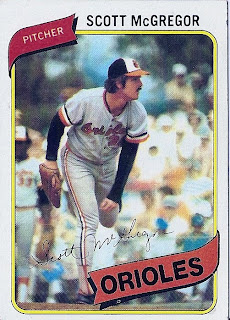 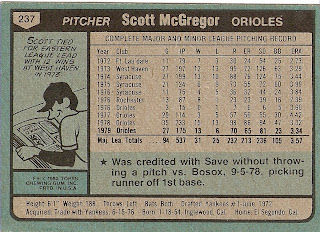 Who is this player?
Scott McGregor, starting pitcher, Baltimore Orioles
Pitching in the shadow of more heralded teammates, Scott McGregor of the Baltimore Orioles proved to be one of the best pitchers in the American League in 1980. The reliable southpaw was very consistent throughout the year, winning 20 games and finishing in the Top Ten in seven categories. He earned his twentieth victory on the final day of the season, the Orioles 100th win of the season. Unfortunately, Baltimore finished three games short in the AL East division race to the New York Yankees.

McGregor played baseball for El Segundo High School and was a teammate of future Hall of Famer George Brett. He was selected by the New York Yankees with the 14th pick of the 1972 draft and in time was considered one of the Yankees top minor league prospects. Scott was involved in a major blockbuster trade in mid-1976, when he, along with Rick Dempsey and Tippy Martinez came to Baltimore and the trio helped the Orioles to two AL pennants. McGregor made his major league debut later that season.

By 1978, McGregor had worked his way into the Orioles starting rotation and he won 15 games. The next year, he missed over a month early in the season but returned strongly to win 13 games as the Orioles won the AL East. Before Game 4 of the ALCS against the California Angels, McGregor guaranteed his teammates a victory. He proved good to his word with a six-hit shutout as the Orioles clinched the American League Pennant. He won Game 3 of the World Series, but Scott and his Orioles teammates fell short in Game 7 as the Birds fell to the Pittsburgh Pirates.

He was named to the All Star Game in 1981 and the finesse, groundball pitcher finished fifth in the league in victories. In 1983, he won 18 games as the Orioles again advanced to the World Series. In the 1983 postseason, McGregor allowed only 2 runs in both Game 1 of the ALCS and Game 1 of the 1983 World Series, however, he lost both games by scores of 2-1. However, in the deciding Game 5 of the World Series, he pitched a complete game shutout as the Orioles defeated the Philadelphia Phillies.

In the following years, McGregor's fortunes seemed to match that of the Orioles. While still a formidable competitor, he was no longer the standout pitcher he had once been. He could still be counted on to take his turn in the O's rotation, but his ERA rose considerably and his record was only a little over .500. Injuries ruined most of the 1987 season and the career Oriole was released in May 1988 after a 13-year major league career. Today, McGregor is an ordained Pentecostal minister and will spend the 2010 season as the pitching coach of the Aberdeen IronBirds.

Why I love this card
I was completely fascinated as a kid with the stat on the back of this card. The fact that he earned a save without throwing a pitch was amazing to me. In an era before Retrosheet my imagination ran wild as to how this actually happened. This was reinforced by my Dad who acknowledged that he had never heard of that happening before. That alone made it special. Bonus points for Eddie Murray in the background.

Something else....
Here is a 2003 interview with McGregor in which he reflects on his major league career.