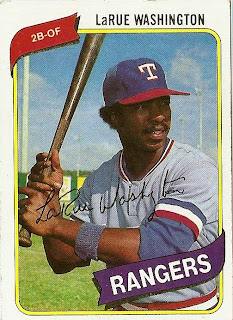 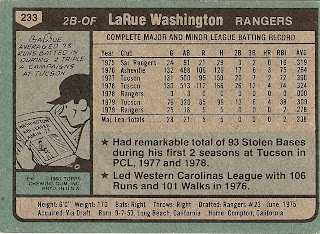 Who is this player?
LaRue Washington, reserve outfielder, Texas Rangers
As Spring Training 1980 opened, LaRue Washington had a decent shot to make the Texas Rangers' roster as a fourth outfielder. Showing excellent speed and a decent glove, he was penciled in to be a reserve. However, the Rangers had an opportunity to obtain Rusty Staub and they traded Washington along with other players to Montreal on March 31, 1980. With the Expos rich in outfielders and contending for a division title, LaRue did not play in the major leagues in 1980.

A native of Long Beach, California, Washington was drafted in 1975 by the Texas Rangers off of the campus of Cal State Dominguez Hills. His skills almost immediately earned him a promotion to Triple-A Tuscon, where he batted .300 and stole 43 bases in his first season. He followed that with a .327 average with 50 swipes in 1978. He played a variety of infield positions with the Toros, primarily second base. The Rangers promoted him to the parent club in September 1978, and he was given a brief look.

He began the 1979 season at Triple-A and spent the majority of the season shuttling between Tuscon and Arlington. While in the minors, he again batted .300 but did not receive a full-time opportunity in his time with the Rangers. LaRue did have two hits in the first game he started against the A's, but was used primarily as a pinch runner. He did not return to the major leagues after the 1979 season, ending his brief two-year career.

He lasted two more years in the minor leagues and was traded to the Baltimore Orioles organization for the 1981 season. However, I was unable to find out his whereabouts after his playing days ended. Any help here would be most appreciated.

Something else....
If you ever search for Washington at baseball-reference.com, make sure that you put a space between "La" and "Rue" otherwise it will not search for him. Just in case you were wondering.

On this date in 1980
Former Supreme Court Justice William O. Douglas passed away, he was 81 years old. With a term lasting 36 years and 209 days, he is the longest-serving justice in the history of the Supreme Court.
Posted by Dean Family at 9:31 PM