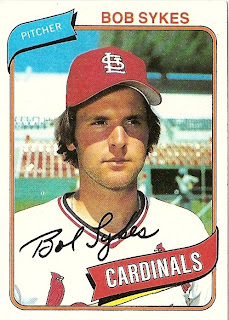 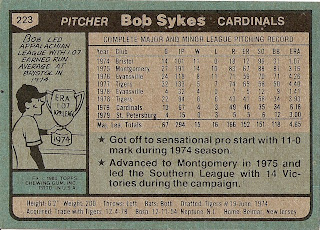 Who is this player?
Bob Sykes, starting pitcher, St. Louis Cardinals
Although he began the 1980 season in the bullpen, Bob Sykes entered the St. Louis Cardinals rotation in June when injuries sidelined other pitchers. The lefthanded Sykes responded by throwing three shutouts; two at the eventual World Champion Phillies and another at the powerful Montreal Expos. Those three outings placed the lefthanded Sykes fourth in the National League in shutouts. However, Sykes was not as sharp in his other assignments, twice allowing six earned runs against the Astros and Giants. He finished the season with a 6-10 record and a 4.64 ERA.

Sykes was selected by the Detroit Tigers in the 1974 amateur draft, in which the Tigers also selected Lance Parrish and Mark Fidrych. Instantly, Sykes raised eyebrows when he went 11-0 with a 1.07 ERA in Rookie ball. He quickly moved his way up the minor league ladder and made the Tigers out of Spring Training 1977. He spent the entire season in Detroit, splitting his time between starting and relieving winning five games and posting a 4.41 ERA.

He began his 1978 season in Triple-A and when he was called back up to Detroit, he responded with two shutouts in his first two starts. The Tigers seemingly didn't know where to place Sykes as he again started and relieved. Following the year, he was traded to the Cardinals for pitcher Aurelio Lopez. The 1979 season was wiped out for Sykes due to a blood clot. He had surgery to remove it from his shoulder but appeared in only 13 games.

Bob was sent back to the bullpen for the 1981 season where he struggled for most of the season. Even though he loved St. Louis and his manager, Whitey Herzog, Sykes was traded to the New York Yankees in October of 1981 for minor league prospect Willie McGee. The Cardinals originally tried to trade Sykes to the Yankees earlier in the season, but Sykes had a no-trade clause in his contract and refused to go. Only after the season when it was clear that he would not be in the Cardinals' plans did he agree to the trade.

While McGee went on to become a NL MVP, Sykes' five year major league career was over, primarily due to continuing arm trouble. Sykes settled in Carmi, Illinois and spent 22 years working for Tartan Oil Company. At the age of 50, Sykes decided to enter the Police Academy and became a Deputy Sheriff and (SRO) Student Resource Officer for the White County (IL) Sheriff’s Department. He taught drug awareness programs for youths and operates a part-time instructional facility called “The Ballyard.” Bob resigned as a deputy in 2008.

Why I love this card
Nothing really about this card other than Sykes was a former Tiger and I knew him because of that. Also, if you had to use a simple posed head shot for a card in this set a Cardinal is not a bad choice. Great cap and the flags have the perfect color and symmetry.

Something else....
On Willie McGee Day in April of 2000, the Cardinals invited Sykes to be part of the ceremony. Sykes has since commented that being part of that ceremony was his greatest day in baseball.

On this date:
To commemorate the 30th Anniversary of 1980, I have decided to add a new feature to the blog, a look back at what occurred on this date.