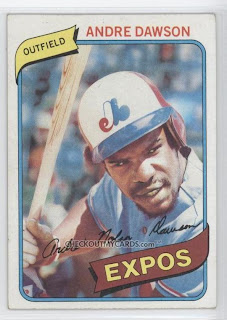 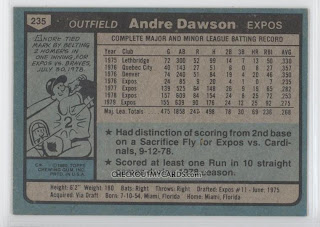 Who is this player?
Andre Dawson, centerfielder, Montreal Expos
Hall of Fame, Class of 2010
The newest member of the Baseball Hall of Fame was in the process of establishing himself as one of the great young stars of the game in 1980. Andre Dawson led his team in hits, doubles, batting average and runs scored as the Expos contended for the NL East title. In addition to his bat, Dawson established himself as an excellent fielder. He won the first of eight Gold Gloves in 1980 and his throwing arm was one of the most feared in the league. While the Expos lost out on the division title, it was clear that Dawson would be one of the best players of the coming decade.

The proud Miami native was drafted by the Montreal Expos in the 11th round of the 1975 amateur draft and made his major league debut the following season. His breakthrough season came in 1977 when he was named National League Rookie of the Year. Dawson helped lead the Expos to respectability and then contention in the late 1970s and early 1980s by showing a blend of power and speed that was unusual for his era. During his Montreal career, he was twice the NL runner-up for Most Valuable Player (1981 & 1983) and is the only Expo to hit 200 home runs and steal 200 bases.

Nicknamed "The Hawk," Dawson appeared in the postseason for the first time in 1981 and batted .300 in the NLDS against the Phillies. However, Dawson's bat went cold in the NLCS, batting only .150 in the Expos five game loss to the Los Angeles Dodgers. During this era, Dawson continuously found himself among the league leaders in many offensive categories, consistently found himself representing his team in the All-Star Game and was a multiple winner of the Silver Slugger and Gold Glove Award

However, the hard artificial turf in Montreal's Olympic Stadium took its toll on Dawson's knees and he signed with the Chicago Cubs prior to the 1987 season. Hawk responded with the best statistical season of his career and was named National League MVP. Even though the Cubs finished in last place, Dawson led the league by slamming 49 home runs and drove in 137 runs. In six seasons in Chicago, Dawson averaged 29 homers and 98 RBI a year and Andre was a major reason the Cubs won the NL East title in 1989. Dawson again had a miserable NLCS, batting a mere .105 in Chicago's loss to the San Francisco Giants.

Dawson moved on to Boston in 1992, where he began the transition to a part-time player. Hampered again by knee injuries, he spent two years in Beantown before moving back home to Miami. He spent the final two seasons (1995-96) of his 21-year career with the Florida Marlins. He moved into the Marlins front office where he currently serves as as special assistant and was elected to the Baseball Hall of Fame in 2010, his ninth year on the ballot. He will be inducted formally later this summer.

Why I love this card
I know I'm not the smartest guy in the world, but I could never, ever see the "M" on Dawson's helmet in 1980. In many ways that logo is and will always be "ELB" to me.

Something else....
Andre Dawson is one of only three playes in Major League history to hit 400 career home runs and steal 300 career bases. The other two? Willie Mays and Barry Bonds. Not bad company.

Labels: (Hall of Fame), (On this date), Montreal Expos