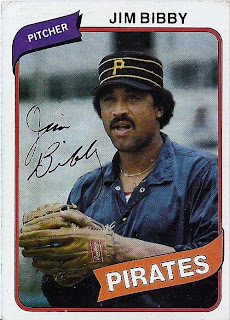 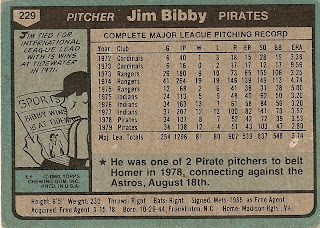 Who is this player?
Jim Bibby, starting pitcher, Pittsburgh Pirates
As the Pirates began the defense of their World Championship in 1980, Jim Bibby emerged as the staff ace. The 6'5" righthander raced to a 11-1 start and was selected to his first All-Star Game, where he pitched a scoreless sixth inning. One of his more impressive performances of the year came on May 27, when he pitched 11 innings against the Phillies in a 3-2 Pirates victory. While Pittsburgh failed to repeat, Bibby tied a career-high with 19 wins, led the league in winning percentage and was third in the Cy Young Award voting.

Born in Franklinton, North Carolina, Bibby had to endure more detours than a normal prospect on his path to the major leagues. After being drafted by the New York Mets out of Fayetteville State University in 1965, he missed two years because of military service that included a tour of Vietnam. Another year was lost because of a back injury that required spinal fusion surgery. Despite that, Bibby perservered and made his major league debut as a member of the St. Louis Cardinals in 1972.

He was traded to the Rangers in 1973 and was immediately inserted into their starting rotation. He threw a one-hitter in his first month in Texas and later that season, fired the first no-hitter in team history on July 30, 1973 against the World Champion Oakland Athletics. The following year, he won 19 games on a surprising Rangers squad that finished second in the AL West. The dependable Bibby finished second in his league that year with 41 starts.

Bibby started out slowly in 1975, with an ERA over 5.00 when he was traded again, this time to the Cleveland Indians. Bibby spent a little over two years in Cleveland, again serving as a durable and dependable part of the Tribe's starting rotation. He won 30 games with Cleveland before entering the free agent market and being signed by Pittsburgh in 1978. He spent six productive seasons with the Pirates, going 12-4 with a 2.81 ERA in 1979 and starting Game 7 of the World Series. Although he did not earn a decision in the postseason, Bibby had a 2.08 ERA in three starts as Pittsburgh went on to a title.

An arm injury caused him to miss the entire 1982 season and he spent 1983 as a swingman. It was a rough year for Jim as he finished with a 6.69 ERA. He returned to Texas in 1984 for his 12th and final season. Bibby spent many years as a coach, reaching the Triple-A level in 2000. The bulk of his coaching career came with the Lynchburg Hillcats, who honored him by retiring his number in 2002. After two knee replacement operations in 2001, Jim Bibby's coaching career came to an end and he is enjoying retirement in Madison Heights, Virginia.

Why I love this card
I love this card, primarily because it reminds me of this card. As much as I could, I traded my 1980 doubles to the older kids for cards from other years. It didn't matter who they were actually, I just wanted the cards. I'm sure that I got rooked often, but I didn't care then and don't care know. There was something about that 1977 Bibby card with the awesome afro and Indians jersey that appealed to me. When I was told that the photo was taken at Tiger Stadium when they had green seats - I was hooked.

Something else....
Bibby's brother is Henry Bibby, a former NBA star, primarily with the Philadelphia 76ers. His nephew (and Henry's son) is Mike Bibby who is currently playing with the Atlanta Hawks.

On this date in 1980:
The NCAA decides to sponsor women's championships in 5 sports; women's basketball, field hockey, tennis, swimming and volleyball.
Posted by Dean Family at 1:10 PM