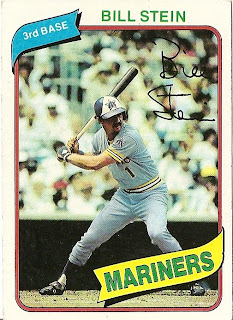 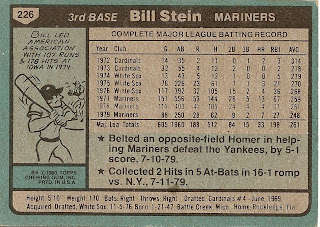 Who is this player?
Bill Stein, utility player, Seattle Mariners
After losing his third base job in 1979 due to injury, Bill Stein began the 1980 season on the Mariner bench. When given the opportunity to start, the righthanded Stein took full advantage and batted .370 during the month of April. He continued to bat over .300 but suffered a hand injury in June and missed nearly two months. He celebrated his return with a four-hit performance against Toronto, but was not used as often under new manager Maury Wills, who was hired while Stein was out. He left the Mariners in December and signed a free agent contract with the Texas Rangers.

As one of the most versatile players of his era, Bill Stein played seven different positions in his major league career and later established himself as a preeminent pinch hitter. A native of Battle Creek, MI, Bill was drafted by the St. Louis Cardinals off of the campus of Southern Illinois University. He was given a brief look near the end of the 1972 season and his first major league hit was a home run against the Phillies. However, Bill was unable to stick in St. Louis and was traded to the California Angels.

He spent six months in Anaheim before being on the move, this time to the Chicago White Sox. In Chicago, Stein was given the chance to be a regular performer and played in 117 games in 1976 at four different positions. However, he was left unprotected by the Pale Hose in the expansion draft and was selected by the Seattle Mariners. As the first third baseman in team history, Stein achieved career highs in nearly every offensive category in 1977. He was one of the Mariners more reliable performers in their early years.

Stein moved on to the Texas Rangers for the 1981 season and he established an American League record with seven successive pinch hits from April 14 through May 25. In the final five seasons of his 14-year career (1981-85), Stein established a well-deserved reputation as one of the most clutch pinch hitters in baseball. He was consistently among the league leaders in hits and average among substitute batters.

He played in the Senior Professional Baseball League in 1989 and spent the early 1990s as a manager within the New York Mets organization. He also managed several independent teams before retiring from organized baseball in 1994. He currently is enjoying retirement in Texas, giving private baseball lessons. Over the years, he has been a very cooperative autograph signer as he signed for me through the mail on multiple occasions.

Why I love this card
This card and several Mariners like it remind me that for years they never seemed to show any Mariners cards photographed at the Kingdome. Guys were either photographed on the road (like Stein is here) or at Spring Training.

Something else....
I didn't realize how generous Mr. Stein was with his signature until I was looking at my cards again. Silly me, I never sent him a 1980 to sign. I have a '78, '79, and '81 but no '80. Must have been the facsimile autograph on the front that confused me.

On this date:
B.A.D. Cats premiered on ABC. If you don't remember it, no worries, it only lasted five episodes. It was ABC's attempt to do a "Dukes of Hazard" style show, starring Michelle Pfeiffer. Also appearing in the show was Vic Morrow, Jimmie "J.J." Walker, and LaWanda (Aunt Esther) Page. Never thought I would get a Sanford and Son reference in.
Posted by Dean Family at 11:12 PM

Labels: (On this date), Seattle Mariners