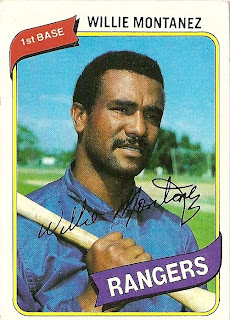 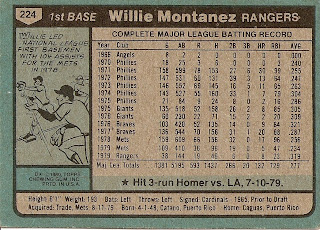 Who is this player?
Willie Montanez, first baseman, Texas Rangers
1980 for Willie Montanez would be a well-traveled year. The lefthand hitting first baseman began the year a member of the Texas Rangers as shown in his Topps card above. In February, he was traded to the San Diego Padres in exchange for Hall of Famer Gaylord Perry. Typically batting fifth and providing solid defense, Montanez was on the move again when he was traded to the Montreal Expos in September for the pennant drive. He was primarily used as a pinch-hitter in Montreal, Willie's third team of the year.

Willie Montanez was one of the most colorful players of his era. Known as "Hot Dog," Montanez had a love for the game throughout his 14-year career and a flair for theatrics. He became known for several nuances that have since become his lasting trademark. Willie would flip his bat on his way to the batter's box before every at bat and he would snap his wrist after a routine flyball or popup ala Rickey Henderson.

He made his major league debut in 1966 as a member of the California Angels but did not return to the major leagues for four years. In the interim, he was a member of the St. Louis Cardinals minor league system and was sent to the Phillies as compensation in the aborted Curt Flood trade. It would be in Philadelphia were Montanez would spend the majority of his career.

Montanez had his career season in 1971 when he clubbed 30 home runs and drove in 99 as the Phillies everyday centerfielder. He also finished second in the Rookie of the Year voting. In many ways, he spent the remainder of his career attempting to replicate that performance. He returned to his natural positon (first base) in 1974 and he batted .300. However, he was traded to the San Francisco Giants in May of 1975 and spent the rest of his career playing for eight different teams.

With the Giants and Braves in 1976, he finished second in the league in hits (206) and seventh in batting average (.317). The following year, he represented the Braves in the All-Star Game. With the Mets, he was honored as Met of the Year and had his portrait done by LeRoy Neiman. Several times, he also led his league in fielding, assists or putouts. He bounced around for the remainder of his career, finishing in 1982 in Philadelphia coming full circle.

Why I love this card
In previous posts, I have mentioned that it would always cause a pause to see a player without his hat. This is another one of those cards. No matter what, after I tore off the wrapper and began the furious flip to find star players, this Montanez card would stop me and give it a second look before moving on.

Something else....
Willie's 1980 O-Pee-Chee card reflected his trade to the San Diego. Without any distinctive markings indicating Willie as a member of the Rangers (hat, jersey) it doesn't look as odd as some of the previous O-Pee-Chee cards of guys that have been traded. Here it is: 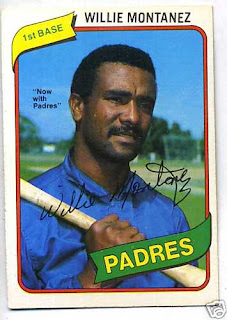 On this date:
Thanks to the Soviet invasion of Afghanistan, the policy of Détente between the United States and USSR had come to an end. President Carter recalled the U.S. ambassador to the Soviet Union and asked the Senate to postpone deliberations on a nuclear arms treaty. It would be the first in a series of moves on the international chessboard that would lead to the US boycott of the 1980 Summer Olympics. A brief summary can be viewed here.
Posted by Dean Family at 6:44 AM