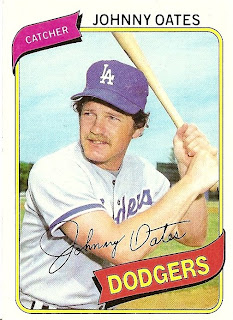 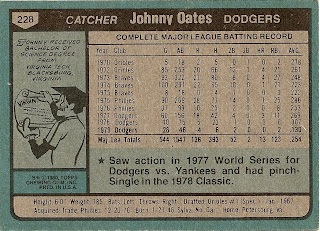 Who is this player?
Johnny Oates, reserve catcher, Los Angeles Dodgers
Shortly before the 1980 season began, Johnny Oates was released by the Los Angeles Dodgers. Less than a week later, he signed on with the New York Yankees, with whom he spent the entire campaign. Oates was used sporadically but his primary contribution to the club came in working with the pitching staff and mentoring starter Rick Cerone, who was replacing the late Thurman Munson. By all accounts, Johnny was a good and popular teammate and the Yankees went on to win the AL East in 1980.

Known throughout his career as a defensive specialist and a good caller of games, the lefthanded batting Oates was drafted by the Baltimore Orioles in 1967 off of the campus of Virigina Tech. Johnny was given a brief look in 1970 and enjoyed an outstanding season at Triple-A Rochester in 1971, where he led the International League in fielding percentage. The following year, he earned a position as part of a platoon with Andy Etchebarren and batted .261. At season's end, he was included in a package that found him traded to the Atlanta Braves.

It was in Atlanta that Oates received his only opportunity to be a regular and was the Braves starting catcher for two seasons. It was during that time that Oates cemented his reputation as a good defensive player and a valuable asset to a major league club. Indeed, he was trade twice more before the end of the 1970s, both times to contending clubs, first to the Philadelphia Phillies and then to the Los Angeles Dodgers.

With the Phillies, he worked his way into a spot starting role and helped tutor All-Star Bob Boone. He appeared in the NLCS in 1976 as Philadelphia made the postseason for the first time in 26 years but was traded to the Dodgers after the season. With Los Angeles, he appeared in two World Series, unfortunately the Dodgers lost both contests. In New York, he again joined a contender, as the Yankees tmade the playoffs both years Oates was there. He retired when the 1981 strike hit, ending his 11-year major league career.

Oates moved on to the second phase of his baseball life, as a coach and manager. He was named manager of the Baltimore Orioles in 1991 and moved on to the Texas Rangers in 1995. The Rangers won their first ever AL West title under Oates and qualified for the playoffs on three separate occasions. Oates was rewarded for his managerial efforts in 1996 when he was named AL Manager of the Year. In 2001, he was diagnosed with brain cancer during which he renewed and promoted his relationship with God. He made an emotional return to Camden Yards the following spring when he threw out the first pitch on Opening Day. Johnny passed away in his native Virginia surrounded by his family in 2004.

Why I love this card
OK, I know that this Johnny Oates is not this Johnny Oates. However, if there was a group around you and you got this card, invariably the group would start singing "Rich Girl." Personally, I think it was a cheap excuse to say "bitch."

Something else....
Johnny Oates is one of only two Texas Rangers to have his number retired. It was retired in a ceremony posthumously during the 2005 season. The club honored Oates by wearing a patch on their uniform that year and hanging a sign in the outfield with Oates' name and number.

On this date:
The Pittsburgh Steelers defeated the Houston Oilers 27-13 in the AFC Championship game and advance to their fourth Super Bowl of the decade. The game was memorable for a controversial play that eventually led to instant reply being used by officials. In the NFC, the Los Angeles Rams ended the Cinderella dreams of the Tampa Bay Buccaneers, defeating the Bucs 9-0.
Posted by Dean Family at 12:53 PM