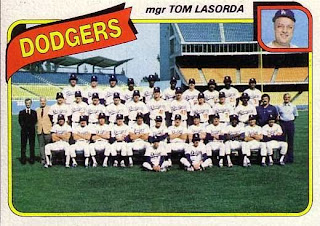 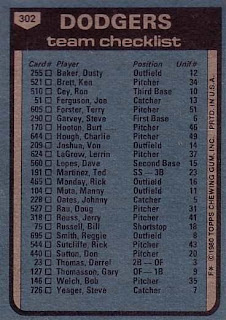 A year after falling out of contention in the National League West, the Los Angeles Dodgers began 1980 intent on reclaiming their status at the premier team in the division. The seeds were planted in November, 1979 when the Dodgers signed two free agents, Dave Goltz and Don Stanhouse. Later, they added veteran Jay Johnstone. Although they lost pitcher Tommy John via free agency, the Dodger farm was producing several quality pitchers such as Bob Welch, 1979 Rookie of the Year Rick Sutcliffe and promising prospect Steve Howe.

The Dodgers were involved in a three-team race with the Houston Astros and Cincinnati Reds for much of the season. Although their famous infield got most of the press, outfielders Reggie Smith and Dusty Baker were the two biggest bats in the Dodger lineup. Smith, in particular, was selected to start the All Star Game and was headed towards an MVP-type season. The game was held that summer at Dodger Stadium for the very first time and Smith was joined in the starting lineup by teammates Steve Garvey and Davey Lopes. Pitchers Jerry Ruess and Welch also made the team as reserves, with Ruess earning the win for the National League.

Smith suffered an injury in August that would sideline him for the remainder of the year, but the Dodgers pressed on without him, as the race came down to the Dodgers and Houston Astros. Down by three games going into the final weekend, Los Angeles defeated the Astros three times to force a tie and a one-game playoff. The Dodgers dream came to an end the following day, when Houston won the game and the division in the tie-breaker. The Dodgers finished the year fourth in batting, second in ERA and third in fielding percentage.

End of the year honors went to Howe, who won Rookie of the Year, and to Baker who won a Silver Slugger Award. Garvey led the entire National League in games played and hits, while Don Sutton led in ERA. Sutton would leave the club that December via free agent, but his replacement in the starting rotation would be the youngest player to appear in a National League game in 1980: Fernando Valenzuela. By the end of the year, the Dodgers and their fans had every reason to be excited about 1981.

Why I love this card
Dodger Stadium. By far, one of my favorite NL parks of this era. It seemed that every game was played under the bright sunshine with Hollywood celebrities dotting the crowd. I loved seeing the late afternoon shadows on the national telecasts (like the 1980 ASG) and it was always beautiful on the Saturday Game of the Week. For years, any time I saw a 76 gas station ball, I thought of Dodger Stadium.

Something else....
Dodger legend Duke Snider, who was inducted into the Hall of Fame in 1980, had his number #4 retired at a ceremony at Dodger Stadium on July 6, 1980.

On this date in 1980:
Led Zeppelin kicks off their farewell tour in Germany. The band played only 14 shows mostly in Germany as a warm up for an American Tour in the fall. That tour never got underway due to the untimely death of John Bonham in September.
Posted by Dean Family at 10:30 PM