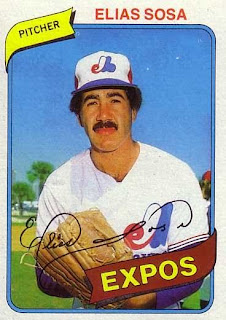 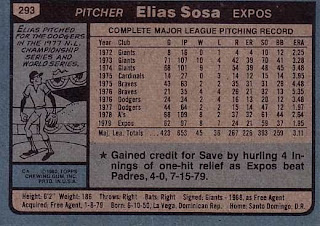 Who is this player?
Elias Sosa, relief pitcher, Montreal Expos
A crucial member of the Montreal Expos relief corps, Elias Sosa appeared in a team-leading 67 games, ninth best in the National League. He won nine and saved nine, finishing the 1980 season with a 3.07 ERA as a setup man and sometime closer. Sosa defeated the Philadelphia Phillies three times in 1980 and helped setup a win on September 27th that virtually tied the Expos for the NL East lead. Unfortunately, Montreal was unable to overtake Philadelphia and the Expos lost the division on the final weekend.

Born in the Dominican Republic, the righthanded Sosa grew up idolizing Hall of Famer Juan Marichal of the San Francisco Giants. He followed Marichal's path to the major leagues when he was drafted by the Giants in 1968 and was a minor league standout. As a starter, he was among the league leaders in several categories and was named an All-Star. When he reached the bigs for good in 1973, he was used exclusively as a relief pitcher, a role that he would assume for the remainder of his career.

The hard-throwing, righthanded reliever had an outstanding season in his rookie year of 1973, possibly the best in his 12-year career. He won 10 and saved 18 and earned Rookie of the Year consideration. He finished third in appearances in fifth in saves and both would be career highs. The Giants traded Sosa to the St. Louis Cardinals after the 1974 season, and although effective, Sosa was consistently on the move, to Atlanta, Los Angeles and then Oakland before signing a free agent contract with Montreal before the 1979 season.

Sosa would spend four years in Montreal, fashioning a 2.70 ERA in his time north of the border and saving 30 games. He squabbled with Montreal management over his contract and they sent him to Detroit shortly before the 1982 season began. Despite Sparky Anderson's proclamations that Sosa would become the team's "stopper" in the bullpen, Sosa did not pitch well in Detroit and was sold to the San Diego Padres following the season. Elias would play one more season in the majors, 1983 before retiring at the age of 33.

After playing a few years in the Dominican Republic, Sosa attempted a comeback in 1987 with the independent San Jose Bees. At the time, the Bees were getting national attention for signing several former major leaguers. More recently, Sosa has been employed as a baseball diplomat, holding clinics and teaching the game to youngsters in Panama.

Why I love this card
Another acknowledgement of the cartoon on the back. The bunting to signify the postseason could offer no better representation. To this day, the patriotic bunting either means Opening Day or the postseason. Not to sound unpatriotic, but it is the first thing that my mind goes to.

Something else....
Sosa appeared in the World Series as a member of the 1977 Los Angeles Dodgers. In Game 6, when Reggie Jackson famously hit three home runs, Sosa was the second pitcher that Jackson faced and homered off of. The other pitchers were Burt Hooton and Charlie Hough.

On this date in 1980:'
Two games on this date go 13 innings. First, Montreal outlasts Chicago 8-7 in Montreal. The winning run comes when Bob Pate (in his major league debut) walks with the bases loaded to drive in Rodney Scott. The second game was in Detroit where the Tigers and Seattle Mariners go 13 innings tied at 3 before the game is called due to rain.
Posted by Dean Family at 11:23 PM