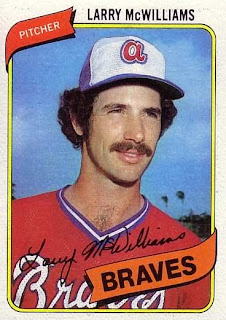 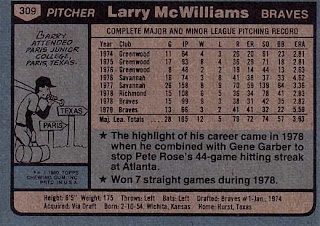 Who is this player?
Larry McWilliams, starting pitcher, Atlanta Braves
In his first full season in the Braves starting rotation, Larry McWilliams made 30 starts and won nine games. The lefthander began the year as Atlanta's #3 starter but he struggled early, losing four of his first six and posting an ERA over 5.00. He rebounded in late June with a stretch of solid pitching, including a nifty three-hit shutout against San Diego on the 4th of July. Two more complete game victories later in the month earned him NL Player of the Week honors. Though he struggled down the stretch, losing his last five decisions, it seemed that McWilliams was part of the Braves' long term plans.

Larry McWilliams starred and Bell High School in Hurst, Texas where he was named his district's Most Valuable Player. He attended Paris Junior College and earned All Conference honors and was selected on the sixth pick in the first round by the Braves in 1974. After an unspectacular minor league career, the pitching-poor Braves gave him an opportunity when they called him up in 1978. Pitching guru Johnny Sain adjusted McWilliams delivery from a slow motion to an accelerated, whip-like delivery. Larry responded masterfully, winning nine games, including his first seven in a row. The highlight of that rookie year game on August 1, 1978 when he and Gene Garber combined to end Pete Rose's 44-game hitting streak.

McWilliams was not as successful in 1979, getting shelled in his first seven starts and he missed significant time with an injury. When Larry pitched poorly in Spring Training 1981, he was optioned to the minor leagues and did not return until after the Player's Strike. He pitched well in limited action in '81 and earned him a return ticket to the Braves rotation in 1982. Pitching out of the bullpen, McWilliams again had difficulty and was traded to the Pittsburgh Pirates in June, 1982

It would be the biggest break of his career as McWilliams did his best pitching in a Pirate uniform. McWilliams peaked in 1983 as he won a career-best 15 games and was named a Sporting News All-Star pitcher. He was fifth in the Cy Young voting and had more strikeouts (199) than any Pittsburgh pitcher since 1969. Larry finished second in the league in winning percentage and shutouts as the Pirates made a serious challenge for the NL East flag.

He suffered arm trouble again in 1985 and was relegated to relief and spot-start duty. He was released by the Pirates in 1987 and picked up again by the Braves. McWilliams moved to four teams in five seasons (Atlanta, St. Louis, Philadelphia, Kansas City). In all cases, these teams were looking for lefthanded pitching and McWilliams was used in several starting and relieving roles. His career came to an end after the 1990 season and 13 years in the major leagues.

Why I love this card
This is the third card in a row to discuss a player's degree or college in the cartoon. Don't think that this fact was lost on me at the time. Bonus points to my Dad as it wasn't lost on him either as he made sure that he drove the point home when my inevitable questions came. Thanks again Dad, for a lot of things, but also making sure that my education wasn't too far away from center.

Something else....
McWilliams is on one of my favorite cards of all-time. Granted it is not a 1980 card, but a 1984 Fleer, but here it is nonetheless: 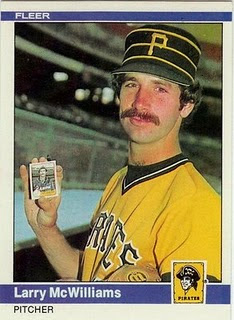