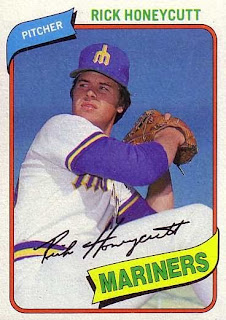 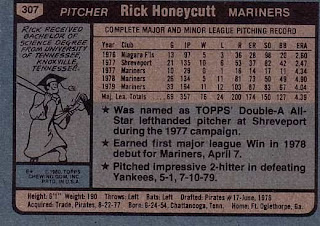 Who is this player?
Rick Honeycutt, starting pitcher, Seattle Mariners
1980 was a tale of two seasons for Rick Honeycutt. The lefthander began the season quickly, winning his first six decisions. When the month of June began, his record stood at 7-1 and his 2.59 ERA was among the league leaders. Rick was rewarded for his performance with a spot on the American League's pitching staff at the All-Star Game. However, Honeycutt struggled from then on, as he would go on to lose 14 of his next 15 decisions. His frustration boiled over in late-September when he was caught scuffing the ball by hiding a thumbtack within a bandage on his finger. He was subsequently suspended for 10 days and in December was part of a multi-player trade with the Texas Rangers.

Tennessee-born Rick Honeycutt led his high school baseball team to State Championship titles in both his junior and senior years. He was originally drafted by the Baltimore Orioles after his senior year, but instead decided to attend the University of Tennessee on a baseball scholarship. There, he was an All-American first baseman-pitcher and won the Southeastern Conference batting title with a .404 mark. Honeycutt was drafted as both a pitcher and a first baseman by the Pittsburgh Pirates in June of 1976. In his first game as a professional, he was the starting pitcher, he batted clean-up and he hit a home run in his first at-bat.

Traded to the Seattle Mariners in July, 1977, Rick made his major league debut that season and spent the next 21 seasons in the major leagues. For his first ten seasons, Rick was a starting pitcher, with the Mariners, Rangers and Dodgers and was twice an All-Star. He had his best year as a starter in 1983, winning 16 games and winning the American League ERA title with 2.42, despite being traded to the Dodgers in August. He proved to be a serviceable, if not spectacular starter with the Dodgers and when he began the 1987 season poorly, he was traded to the Oakland A's.

It was in Oakland that he began the second phase of his career and evolved into
one of the toughest left-handed specialists in the game. Under the guidance of Tony LaRussa, Rick often set up closer Dennis Eckersley. Honeycutt helped the A's to the postseason four times, including three consecutive trips to the World Series and a championship in 1989. He continued that role in the mid-1990s with the Rangers and Yankees before reuniting with Tony LaRussa in 1996 with the St. Louis Cardinals. Although he was the oldest player in baseball at this point, he was still effective; he had 65 appearances and a 2.85 in 1996 as the Cardinals advanced to the NLCS.

His 797 appearances is 8th all-time for lefthanded pitchers and his playing career ended in 1997 after elbow surgery. After his playing career ended, he was inducted into the State of Tennessee Hall of Fame and was the Los Angeles Dodgers' minor league pitching coordinator from 2002 to 2005. He was named pitching coach of the Dodgers in 2006, a position he still holds today.

Why I love this card
I remember that I got this card right around the time that Honeycutt was busted for the thumbtack. For the life of me, I couldn't figure out how or why he would need a thumbtack on the mound. I know my Dad tried to explain it to me, but it was more confusing than ever. I do remember getting a pack of 1980 Football cards at the same time as the transition from summer to fall began.

Something else....
Honeycutt's daughter, Holli, earned a doctorate in physical therapy. The Honeycutt's purchased a 100-acre, 42-stall ranch in northern Georgia that his wife, Debbie, has turned into a retreat for special-needs children, Heartland Ranch.

On this date in 1980:
The Soviet Union announces partial withdrawal of troops from Afghanistan.
Posted by Dean Family at 5:56 PM

Labels: (On this date), Seattle Mariners