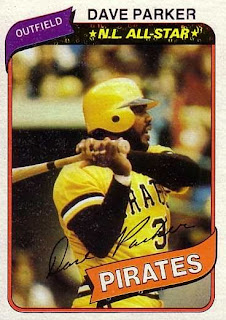 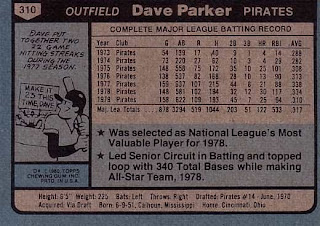 Who is this player?
Dave Parker, rightfielder, Pittsburgh Pirates
Although he was considered one of the best players in the game, Dave Parker was a target for criticism, due to his boastful demeanor and million-dollar-a-year contract. Nevertheless, the "Cobra" was elected to start the All-Star Game by the fans and led the Pirates in RBI. But 1980 was not a good year for Dave Parker. Fans threw batteries at him, he played much of the year with a myriad of injuries, went through a divorce and got sued. Although he batted a very respectable .295, it was considered a "down" year for him and it was widely thought that he would bounce back to his previous form.

Born in Mississippi, but growing up in Cincinnati, Ohio, as a youth Parker was given a glove by future Hall of Famer and Red star Frank Robinson. At age 15 he was big enough and good enough to play with a local semipro team and he was a football star in high school. His senior season he tore his knee yet still earned attention from 62 schools that wanted him to play football. Dave decided he had better chances in baseball, but his injury made several teams wary. He was drafted on the 14th round of the 1970 amateur draft by the Pittsburgh Pirates.

Parker made an immediate impact in the minors; MVP of the Florida League in 1970 and the Carolina League in 1972. He was in Pittsburgh a year later and it took little time for him to be compared to Pirate greats Willie Stargell and Roberto Clemente. During a five year period (1975-1979) he won two batting championships, batting a collective .321, won three Gold Gloves, led the league in hits and doubles, was the 1979 All Star Game MVP and the 1978 National League MVP. As the 1980s began, it appeared that Parker was on the road to Cooperstown.

Unfortunately, it was not to be. After the distractions of 1980, Parker slumped at the plate, gained weight and simply did not perform at his previous levels. When his contract elapsed in 1983, the Pirates allowed him to leave as a free agent and Parker signed with his hometown Cincinnati Reds. One of the reasons for his sudden drop in performance was revealed in 1985 when Parker testified at the Pittsburgh Drug Trials. There, he described his heavy cocaine use and how it effected his play. He claimed that he was now drug-free, and he returned to All-Star status in 1985. He led the NL in RBI and was second in the league's MVP vote while batting .312 and clubbing 34 home runs.

After four years in Cincinnati, the productive, but aging Parker was traded to the Oakland A's where he served as designated hitter. His veteran presence helped lead Oakland to the World Series the two years he was there, including a championship in 1989. He was an All-Star again with Milwaukee in 1990 and played for both the Angels and Blue Jays the following year. He was unable to catch on with another team in 1992 and his 19-year major league career came to an end. He served as a first-base coach for the Anaheim Angels, then as a batting coach for the St. Louis Cardinals in 1998. Today, he owns several Popeye's chicken franchises in the Cincinnati area.

Why I love this card:
This was a premium card to get during the summer of 1980. Yet, I found it very difficult to warm up to Parker. I knew he was a great player, but I didn't view him in the same light as a Brett, Schmidt or Rice. What I remember most about this was my Dad's shock when Parker wore an earring in his ear. To him, it was disrespectful and distasteful. Remember, it was 1980 and it wasn't as common as today. I too, couldn't figure out why a guy would want to wear an earring.

Something else....
Largely due to his peak years, Parker still receives minor Hall of Fame consideration. I suspect that with the recent inductions of Rice and Andre Dawson, Parker's body of work will get further review. I wonder how much the Drug Trials effected his overall bottom line.

Nevertheless, Parker was a star in 1980 and was given a Topps Super Card and Burger King card. I actually like the Burger King version a little better since I think they did a much better job of centering the photo. Both are shown below: 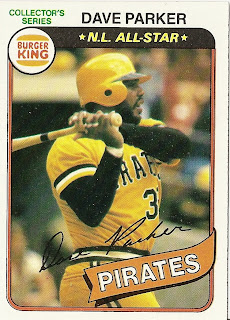 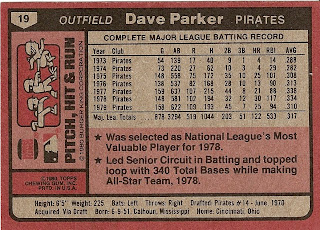 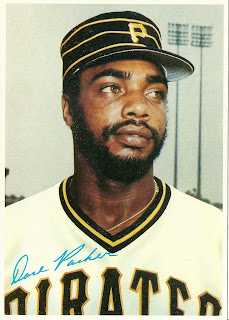 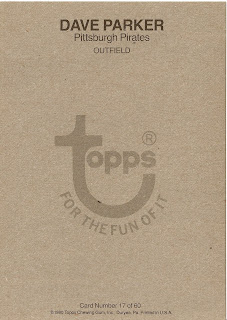 On this date in 1980:
The #1 song in the country on this date is "Coming Up" by Paul McCartney. A largely forgettable song today, it is notable since it is McCartney's first #1 hit after the breakup of his second band, Wings. The video is pretty good and is here.
Posted by Dean Family at 8:48 PM