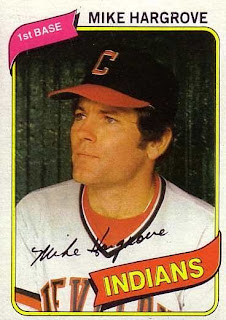 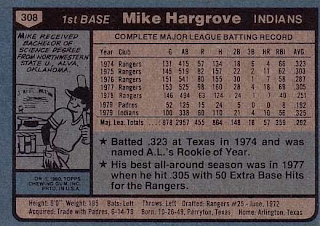 Who is this player?
Mike Hargrove, first baseman, Cleveland Indians
The Human Rain Delay. Mike Hargrove's deliberate routine at the plate before each at-bat belied the fact that the Indian first baseman was an excellent hitter. Playing in 160 games, Hargrove batted .304 and drew a career-high 111 walks. The Tribe's third place hitter also reached career highs in base hits, plate appearances and RBI. A tough player, he was hit on the forearm on a pitch from Ron Guidry, but was in the lineup the next day. His 23 game hitting streak early in the season was one of the longest of the season and he was clearly one of the best players on the Indians.

Best known today by younger fans as the manager of the Indians, Baltimore Orioles and Seattle Mariners, Mike Hargrove put together a very respectable career as a major leaguer. Without ever playing baseball in high school, he attended Northwestern Oklahoma State University, where he lettered in baseball, basketball, and football. He was drafted by the Texas Rangers in the 25th round of the 1972 amateur draft. After just two seasons in the minors, he reached the majors with the Rangers in 1974, and after hitting .323, won the American League Rookie of the Year Award.

In five seasons in Arlington, Hargrove was traded to the San Diego Padres even though he was a consistent hitter and solid fielder. Unfortunately, the Rangers were beset with big financial losses and embarked on a housecleaning. Hargrove looked forward to the move, but expressed remorse that he was leaving the Rangers. He struggled in San Diego, batting .192 in 52 games and was traded to the Cleveland Indians in mid-June, 1979.

Hargrove spent seven seasons in Cleveland, and was noted as a patient hitter with a careful eye and took a lot of pitches. He exceeded 100 bases on balls in 4 seasons and typically had one of the highest on base percentages in the league. He was slowly phased out in Cleveland in favor of Pat Tabler. He was granted free agency following the 1985 season that saw him bat .285 but he did not receive an offer from another team. Collusion by the owners was likely the cause and Hargrove's 12-year major league career came to an end.

He became the Indians manager in 1991 and became the franchise's second winningest manager of all-time. Mike led the Tribe to two World Series appearances (1995 & 1997) and five consecutive division titles, the most successful stretch in team history. He came under fire after losing the 1997 World Series, yet his dismissal as Indians manager by GM John Hart in 1999 was controversial with many fans. He moved on to Baltimore for four years and then to Seattle where he abruptly resigned in the midst of an eight-game winning streak saying his passion for the game was gone. He has since returned to baseball, managing the Liberal BeeJays, a semi-professional baseball team in Kansas for which he also played while in college.

Why I love this card
I remember being perplexed by this card. Where was Hargrove when this photo was taken? Was this the inside of a dugout? A garage? His house? The apparent wood paneling in the background, very fashionable at the time, made it tough to determine. I think I love this card even more know as it is a reminder of how much time we wasted as kids passionately debating the most ridiculous things.

Something else....
Between high school, college and his major league debut, all five of the teams for which he played (Perryton High, Northwestern Oklahoma State University, Class A, Class AA, and Texas) all shared the same nickname, the Rangers.

On this date in 1980:
David Letterman begins his morning television program on NBC. One of his guests was Andy Kaufman. You can watch it here. Letterman did not connect with AM audiences, but his show would be repackaged and moved to late night. Kaufman would be a staple of the early days of that show as well.
Posted by Dean Family at 11:29 AM