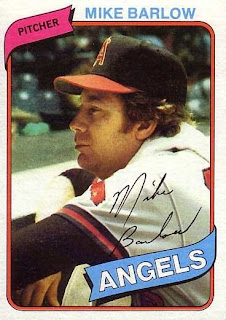 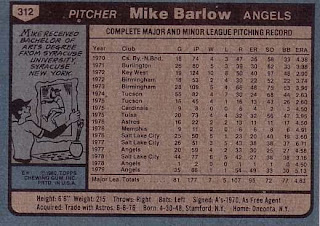 Who is this player?
Mike Barlow, relief pitcher, California Angels
Midway during Spring Training in 1980, Mike Barlow found himself traded from the defending AL West Champion California Angels to the Toronto Blue Jays. Despite coming off a 109-loss season, there was optimism in Toronto and Barlow was being called upon to provide veteran guidance on the young Blue Jays pitching staff. The imposing (6'6") righthander served primarily as a setup man and sometimes closer. He won three, saved five and posted a 4.09 ERA in 40 games in 1980. A highlight for Mike came on September 7th, when he saved both games of a doubleheader against the Chicago White Sox.

An outstanding athlete as a youth, Mike Barlow pitched two no-hitters in American Legion baseball in New York, but he was also an outstanding basketball player. He was such a good hoops player, he received a scholarship to play at Syracuse University. Barlow played sparingly for three seasons with the Orangemen, though he would letter in 1968 and 1969. Illness kept him to only 3 games his senior year. He also stood out on the diamond and was drafted twice (by the Orioles and Dodgers) before signing a free agent contract with the Oakland A's in 1970.

Used mostly as a middle reliever for the majority of his career, Barlow pitched with four different teams; the St. Louis Cardinals, Houston Astros, Angels and Blue Jays. For nearly every year of his career, Barlow split time between the majors and minors, the only exception being 1979, the season the Angels won their first ever division title. Though he posted a high ERA (5.13), he appeared in 35 games for the AL West champs, including Game 4 of the American League Championship Series.

Barlow last appeared in a major league game in 1981, bringing to end a major league career that spanned parts of seven seasons. He stayed in the Blue Jays organization in 1982, earning 8 saves in relief for the Syracuse Chiefs. When the minor league season ended, Barlow was not recalled to the major leagues, and Mike left organized baseball.

From 1987 to 1993, he teamed with Syracuse's Doug Logan as the official broadcast team for Syracuse University basketball games. He became the Athletic Director of Bishop Grimes High School (Syracuse) in 2001 as position that he still holds today.

Why I love this card
I loved the backs of cards of players like Barlow. Seeing all the minor league stops all the way made me appreciate how long the road sometimes is to the major leagues. However, later on I became curious as to why they included some player's minor league records and not others. I know that there are space limitations, but I wonder what the decision making process was. Barlow's entire history is here, but for a similar player, say Dave Rosello, only his major league record is listed. Funny what I still waste time thinking about.

Something else....
I am fairly certain that this photograph was taken at Tiger Stadium in Detroit. The visitor's dugout in relation to the seats is consistent and the shadows suggest a 1:35 afternoon start. What I cant figure is what Barlow is leaning on. He is above the top of the dugout, so its not that. It appears to be a chair turned the opposite way that he is sitting on, which would be highly unusal for Tiger Stadium at that time. Again, funny what I still waste time thinking about.

On this date in 1980:
One of the worst heat waves in history begins to claim its first victims. In Dallas, record temperatures reach 113 degrees and the drought continues in Montana, Minnesota, Wyoming and the Dakotas. Comparisions to Dust Bowl days of the 1930s are evoked. By the time the summer comes to an end, more than 200 deaths are blamed on the heat in 13 states.
Posted by Dean Family at 11:47 PM