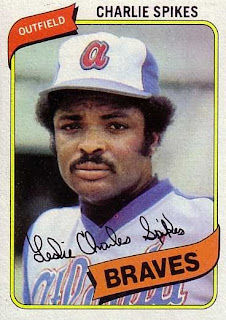 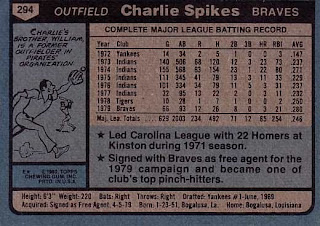 Who is this player?
Charlie Spikes, utility, Atlanta Braves
In what would be the final season of his nine-year major league career, Charlie Spikes was the Atlanta Braves pinch-hitting specialist during the 1980 season. 34 of the 41 games Charlie appeared in that season came as a pinch-batter and he excelled in the role, batting .323. He thrived in late-inning and pressure situations and often keyed several Brave rallies. He became a free agent at the end of the season and when no major league team made an offer, Charlie signed a million dollar contract to play with the Chunichi Dragons in Japan.

Charlie Spikes was a high school baseball star out of Bogalusa, Louisiana and led his team to a state championship in 1969. Charlie homered for the only run of the game, capping a prep career that would lead to his selection by the New York Yankees on the first round of the amateur draft. He would lead the Carolina League in homers in 1971 and was an minor league All-Star the following season. He quickly established a reputation as one of the finest prospects in the Yankee organization. Charlie played in a handful of games near the end of the 1972 season, but was involved in a multi-player trade that sent him to the Indians for Graig Nettles.

Spikes would lead Cleveland with 23 home runs as a rookie in 1973, the most by an Indian freshman in 23 years. He was an instant fan favorite and the club's PR department dubbed him "The Bogalusa Bomber." Stardom seemed certain for Spikes. His manager, Ken Aspromonte compared him to Hall of Famer Larry Doby and initially New York fans were critical of the trade as Spikes outperformed Nettles in 1973 and 1974.

Things began to change for Spikes when Frank Robinson was hired as Cleveland manager in 1975. The easy-going Spikes did not blossom under the harsh and critical eye of Robinson, whose "tough-love" approach did not help Spikes' career. Charlie was criticized in the press, slumped, lost playing time and eventually found himself demoted to the minor leagues. When he clashed with his manager at Triple-A Toledo, he found himself traded to the Detroit Tigers. To his credit, Spikes never blamed Robinson's for his career turn, instead praising Robby's efforts as the first black manager in major league history.

Despite high hopes, he played very little for Detroit in 1978 and was almost out of baseball before his old minor league manager Bobby Cox (now in Atlanta) recommended the Braves sign him before the 1979 season. He played two seasons in Atlanta, mostly as a reserve player. After his playing days, Spikes returned to his native Louisiana where he worked for several innings in a textile factory. He suffered a back injury a few years ago and is now collecting his disability and retired.

Why I love this card
Leslie Charles Spikes. I always loved the full signature. And we giggled because we were dumb kids and thought Leslie was a girl's name.

Something else....
Charlie receives not one, but two mentions on the fifth-ever episode of "Cheers." Here is the link. The first mention is at the very beginning, the second at about the 1:50 mark.

On this date in 1980:
The Amateur Free-Agent Draft draft is held. The New York Mets have the first selection and draft outfielder Darryl Strawberry out of Crenshaw High School in Los Angeles. Also selected in the first round of this draft is future Red Sox manager Terry Francona (by the Expos) and current Oakland GM Billy Beane (by the Mets)
Posted by Dean Family at 11:10 PM