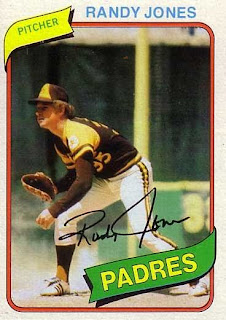 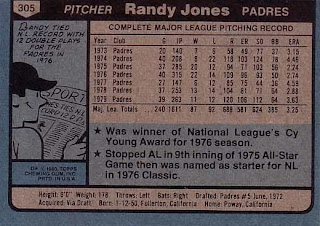 Who is this player?
Randy Jones, starting pitcher, San Diego Padres
On the morning of May 16, 1980 things were looking up for Randy Jones of the San Diego Padres. He had just pitched his third consecutive shutout, defeating the Chicago Cubs. His record stood at 4-2 with a 1.82 ERA. It appeared that he had regained the Cy Young form that had been elusive since 1976. He went on to lose three straight all by one run before being shelled and landing on the disabled list with a rib separation. He pitched poorly upon his return and was shelved again, this time for the season in August. Randy finished 1980 5-13 and the longtime Padre was traded to the New York Mets in December.

As a youngster, the lefthanded throwing Jones received pitching tutelage from Claude Osteen when he was pitching for the Los Angeles Dodgers. Osteen taught him a curve ball and a sinker which would propell Jones into the major leagues. First, Randy earned a Bachelor's Degree in business from Chapman College in California and made the College All-America team as a senior. This attracted attention from the San Diego Padres who drafted him in 1972. He spent a little less than a year in the minors before he was brought to the parent club for good.

Jones became the first Padre-developed superstar and helped bring respectability to the floundering franchise. He won seven of 13 decisions in 1973 with a 3.16 ERA and was named to the Topps Rookie All Star team. He was the team's most effective pitcher in the second half and from then on, was clearly established as the team ace. He suffered a hard luck season in 1974, losing 22 games but was poised to establish himself as one of the games best pitchers.

Indeed, Jones did so in 1975, winning 20 games and being named an All Star and Comeback Player of the Year. He defeated every team in the National League and finished second in the Cy Young voting. Incredibly, Jones improved on his performance in 1976. En route to winning the Cy Young, Randy won 16 games by the All-Star break and was named the NL's starting pitcher. His 22 wins represented nearly one-third of his team's total output for 1976. Known for his quick work on the mound, Jones tied Christy Mathewson's league record of 68 consecutive innings without issuing a walk. He didn't strike out many (93), rather he was a master at inducing an easy ground ball.

Unfortunately, he never achieved the same level of success, primarily due to nerve damage in his pitching arm and poor run support from the weak-hitting Padres. He spent the final two seasons of his 10-year career with the New York Mets and retired after failing to catch on with the Pittsburgh Pirates in 1983. Jones has kept busy in retirement; he operates a BBQ business at Petco Park, runs a baseball academy and is the host of Outdoor Channel's "Randy Jones' Strike Zone" television program.

Why I love this card
Unlike the other Padres players featured so far, the Randy Jones card features the player's name in blue ink rather than the customary black. I remember thinking that perhaps this was an error card, but that wasn't the case. At the time, it was more memorable to me than Jones' blond afro.

Something else....
Just as Jones was tutored by Claude Osteen as a youth, Jones himself taught the finer art of pitching to several kids over the years. One of them was a very young Barry Zito, who like his mentor, also won a Cy Young Award, with the A's in 2002.

On this date in 1980:
After 14 seasons, the original Hollywood Squares goes off the air with its final broadcast on NBC. Here is what replaced it. You know, that Letterman guy?
Posted by Dean Family at 9:56 PM