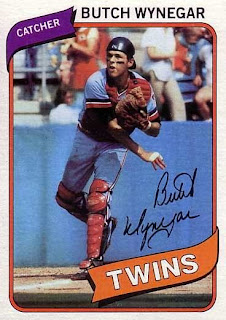 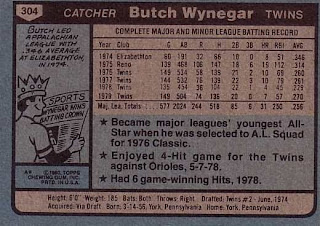 Who is this player?
Butch Wynegar, catcher, Minnesota Twins
An excellent defensive receiver with a keen batting eye, Butch Wynegar of the Minnesota Twins was seen as a rising star as the 1980 season began. Indeed, The Complete Handbook of Baseball tabbed him as "the next Johnny Bench." He had a solid first half at the plate before tailing off and finished the year batting .255. The popular fan favorite also led all American League catchers with 13 double plays and threw out 44% of enemy base runners. In a sharp departure from club policy, the Twins rewarded Wynegar after the season with a multi-year, multi-million dollar contract.

A product of York, Pennsylvania, Harold "Butch" Wynegar took up switch hitting at age eight, emulating his idol, Mickey Mantle. He was an outstanding player in high school and switched to catcher when his potential became apparent. He wound up being drafted by the Minnesota Twins on the second round in 1974. After leading the Appalachian League in batting and fielding in his first season, he topped the California League in RBI and batted .314 in his second. Those performances earned him an extended look in Spring Training 1976 from new Twins manager Gene Mauch.

Mauch installed him as his starter behind the plate and he responded with a .300 batting average most of the first half. This earned him a spot on the AL All Star Team and at 20 years, 121 days, Wynegar became the youngest player ever to appear in the Midsummer Classic. Although his performance in his rookie year was overshadowed by Mark "The Bird" Fidrych, he was named the Sporting News' Rookie of the Year for 1976. Another solid season followed in 1977, with Wynegar again earning another All Star nod.

While the Twins at various times during this period had some exceptional talent, the frugal mindset of ownership kept several players from staying any extended period of time. Rather than pay high contracts to players such as Rod Carew, Larry Hisle, Dave Goltz, Roy Smalley, Ken Landreaux and others, the Twins traded them away. This eventually led to Mauch leaving the club and when Wynegar's production suffered due to bone chips in his elbow, he was next - traded to the New York Yankees.

Butch was the Yankees' starting catcher for three seasons, but he never quite fulfilled the early promised predicted for him. Some of that was due to nagging injuries to his knees and big toe that made it painful for him to squat. The other part was due to the high anxiety of playing in New York and for two emotional managers; Billy Martin and Lou Piniella. Wynegar often stated that Martin in particular made it difficult to do his job due to Martin's incessant ump baiting.

After two season as a part-timer with the California Angels, Wynegar retired after the 1988 season at the age of 32. Like many of his contemporaries, he began a second career teaching the game, both at the collegiate and professional levels. He was the hitting coach of the Milwaukee Brewers from 2003-2006 and has since been the hitting coach for the Scranton/Wilkes-Barre, the Triple-A affiliate of the New York Yankees.

Why I love this card
I bought the Butch Wynegar hype in 1980. Switch-hitter. Two-time All-Star. Strong-accurate arm. This card did little to damage the aura. With the possible exception of Gary Carter, there hasn't been a better shot of a catcher in action so far. I would have given Wynegar the nod simply for the eye black. That and the fact that it appeared the person over Butch's shoulder wasn't wearing any pants.

Something else....
In October 1978, Twins owner Calvin Griffith delivered several salacious comments regarding the Twins and baseball when he appeared at a dinner hosted by the Waseca (Minnesota) Lions Club. Among other things, he stated that Butch Wynegar's drop off in performance in 1978 was due to:

The worst thing that can happen to a ballplayer is to get married and then go to spring training.....Wynegar did the same thing and he's had a miserable year. He was playing 'hands' with his wife during spring training and instead of running around the outfield he did his running around the bedroom. Now, love is love, but it comes pretty cheap for these young ballplayers these days, and I think they should take advantage of that and wait to get married. That's the way I look at it.

I can't imagine any owner getting away with saying something like that today, and those were some of the more milder things Griffith said. An article regarding it can be read here.
Posted by Dean Family at 11:52 PM