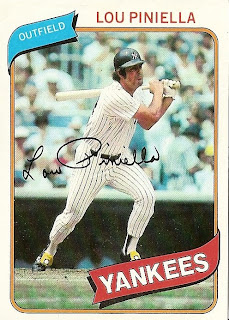 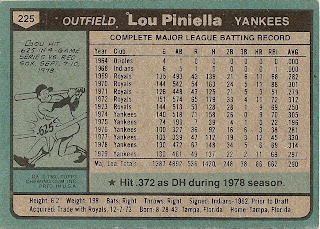 Who is this player?
Lou Piniella, left fielder, New York Yankees
Known today as the bombastic manager of the Chicago Cubs, Lou Piniella's playing days have largely faded quietly into memory. In 1980, he was a integral part of the New York Yankees. A fan favorite that was greeted by a chant of "Looooooooou" when he stepped to the plate, the righthand hitting Piniella batted .287 in 116 games. He helped lead New York to the playoffs for the fourth time in five years. When the Yankees lost in the ALCS, whispers of concern began regarding Lou's age (36) and his lack of run production (27 RBI).

Lou Piniella's 18-year playing career stretches as far back as 1964, when he appeared in four games for the Baltimore Orioles. The Florida native was an excellent amateur athlete, being named an All American in high school (basketball). Lou played PONY league baseball with fellow standout Tony LaRussa and starred at the University of Tampa. After his brief stint with the Orioles, Piniella spent time in three different organizations before returning to the majors in 1968 as a member of the Cleveland Indians.

He was selected by the expansion Seattle Pilots for the 1969 season, but he was traded to the Kansas City Royals shortly before Opening Day. The Royals were also in their maiden voyage and Piniella was their first ever leadoff hitter. He is in the Royals record book for earning the first hit a scoring the first run in team history. Lou's performance (.282 11HR 68RBI) earned him the Rookie of the Year award. In five years in Kansas City, Piniella batted .286, and had an excellent 1972 season. That year, he earned his only All-Star nod, led the league in doubles and finished second in batting.

Prior to the 1974 season, he was traded to the Yankees and it was in New York that he achieved his most fame as a player. He played in four World Series with the Yankees was part of the fabled "Bronx Zoo" that won the World Championship in 1977 & 1978. His fielding play in ninth inning of the 1978 AL East playoff is credited with helping the Yankees advance to the playoff. Lou spent 11 seasons in New York, often times in the center of controversy, one of more aggressive and emotional players on the team. He retired in a tearful ceremony in June of 1984.

In nearly every season since his retirement as a player, Piniella has managed at the major league level. After a tumultuous tenure as Yankee GM and manager, he led the Cincinnati Reds to a World Series title in 1990. From there he went to Seattle where the Mariners became contenders for the first time and achieved a record 116 wins in 2001. Unable to win a World Series after ten years in Seattle, Piniella returned to his home town to manage the Tampa Bay Devil Rays for three seasons before becoming the Cubs skipper in 2007.

Why I love this card
One of the neighborhood kids, Louie down the block, moved onto our street in 1978. They lived in Flushing, New York and he was a huge Yankees fan. Since they shared the same first name, he was naturally a huge Piniella fan as well. It was an automatic that if anyone got a Piniella card we would just give it to him, more to shut him up than anything else. He tried to get me to like Chris Chambliss for the same reasons, but it just didn't take.

Something else....
Piniella holds the distinction of being the only major league player to be thrown out at every base in a single game. He accomplished this "feat" on April 16, 1970 in Milwaukee. It was a good game otherwise for Lou, he went 3-5 with a homer and three RBI and the Royals defeated the Brewers 8-6.

On this date:
Alfred Hitchcock is knighted during ceremony at Universal Studios in Los Angeles, the first ever director to be so honored. Hitchcock was named by Queen Elizabeth II the knight commander of the Order of the British Empire. The 80-year old Hitchcock would pass away on April 29, 1980.
Posted by Dean Family at 1:15 PM