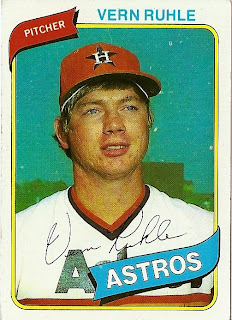 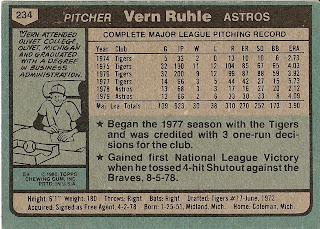 Who is this player?
Vern Ruhle, starting pitcher, Houston Astros
Probably the least heralded member of the Houston Astros' starting rotation, Vern Ruhle's contributions in 1980 were invaluable. Pitching as the #4 starter behind J.R. Richard, Nolan Ryan and Joe Niekro, Ruhle won a career-high 12 games as the Astros claimed the NL West title. After a stroke fell Richard, Ruhle posted a 1.71 ERA in six August starts and entered the postseason with the leading ERA on the team. Ruhle was involved in the most controversial play of the NLCS that you can read about here and listen to here. Unfortunately, the Astros lost the Series in five games.

Born in Coleman, Michigan he attended nearby Olivet College and was drafted in the 1972 amateur draft by the hometown Detroit Tigers. The righthanded Ruhle made an impressive debut at the end of the 1974 season that earned him a spot in the Tigers rotation. He put up a respectable 11 wins for a Detroit team that lost 102 games in 1975. Ruhle struggled overall as a Tiger as Detroit consistently finished in the second division. With an influx of young pitchers moving upward in the Tigers organization, Ruhle was released during Spring Training 1978.

He was unemployed for only one day, signing on with the Houston Astros and began the season at Triple-A. He worked his way back to the major leagues by posting a 2.12 ERA in 13 appearance with the Astros. He was inserted into the rotation in 1979 but missed some time during the summer due to injury. Several of his teammates attributed his absence from the rotation as one of the reasons the Astros lost out on the NL West title that season. Ruhle and the Astros again appeared in the postseason in 1981 and although he pitched well, he and Houston again fell short in the playoffs.

Ruhle spent seven seasons in Houston, winning 39 games and eventually being moved to the bullpen full time in 1983. He was granted free agency following the 1984 season and he spent one year with the Cleveland Indians. He was on the move again and spent his 13th and final season with the AL West Champion California Angels in 1986. Ruhle's last appearance was Game 4 of the ALCS. Vern spent many years as a pitching coach with Astros, Phillies, Mets and Reds. In Cincinnati he was diagnosed with multiple myeloma and Ruhle passed away on January 20, 2007 at the age of 55.

Why I love this card
I was convinced that the Astros got robbed out of a triple play during the NLCS that year. I used to watch the games with all my cards out and I distinctly remember reading the back of Ruhle's card during the confusion and delay over the triple play. I was shocked that he was a Tiger and couldn't understand why the Tigers would have gotten rid of him. My dad's explanation of "he wasn't any good when he was here" didn't help matters.

Something else....
Purely coincidental that this post is going up on the third anniversary of Vern's passing. Rest in peace Mr. Ruhle.

On this date in 1980:
The Pittsburgh Steelers defeated the Los Angeles Rams 31-19 in Super Bowl XIV. One of my favorite sports photos of all time came from this game, capture on the Sports Illustrated cover of John Stallworth. 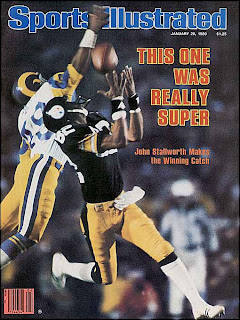