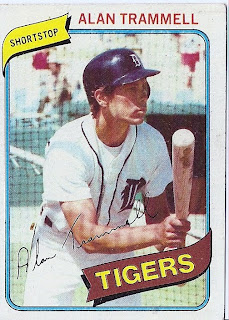 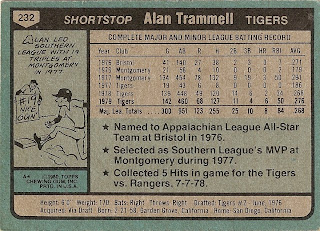 Who is this player?
Alan Trammell, shortstop, Detroit Tigers
As the decade began, the consensus was that the Detroit Tigers were one of the best young teams in baseball. As one of manager Sparky Anderson's favorites, the 22-year old Alan Trammell was looked upon as one of the players that would lead the team. In just his third full season, he was among the league leaders in batting in the first half and was selected to his first All Star Game. By the end of the season, he had established himself as one of the best shortstops in the game, winning his first Gold Glove Award and finishing the year with a .300 batting average.

Alan Trammell was a San Diego native and was drafted by the Detroit Tigers out of high school in 1976. Within a year, he was promoted to the Tigers, where he would spend the next 20 seasons. Only legends Ty Cobb and Al Kaline would play with the Tigers longer. In his early years, Trammell gained more attention for his glove, winning consecutive Gold Gloves in 1980-81. He provided a little pop with the bat, and actually spent the majority of the 1982 season batting ninth in the Tiger lineup.

Returned to his customary #2 spot in the batting order in 1983, Trammell batted .342 after June 1. He finished the year at .319, good for fourth in the league. The Tigers won 92 games and gave a preview of things to come. Led by Trammell, the 1984 Tigers raced off to a historic 35-5 start en route to a wire-to-wire World Championship. Trammell made the cover of Sports Illustrated twice that year, the second after being named MVP in the World Series for batting .450 including two home runs in Game Four. He and Lou Whitaker even made an appearance on the hit TV show Magnum PI.

Injuries began to hamper Trammell in the following years, but in 1986 he became only the second player in Detroit history to hit 20 home runs and steal 20 bases. His best statistical year came the following season. Moved to the cleanup position after the departure of Lance Parrish, he became the first Tiger since Al Kaline to have 200 hits and 100 RBI in the same season. He led the Tigers in a dogfight with the Toronto Blue Jays for the AL East title, won by Detroit on the season's final day.

As the seasons went on, Trammell became the face of the Tigers. He was fourth in the league in batting in 1990 and an All Star for the sixth and final time. From then on, injuries reduced him to a part-time player, which he accepted with grace. He retired in 1996. He returned to the Tigers in 2003 as their manager and presided over one of the worst teams in major league history as the Tigers lost 119 games. He was let go by the team following the 2005 season and is currently the bench coach for Lou Piniella on the Chicago Cubs.

Why I love this card
Trammell was a significant part of my childhood. I was nine the summer this card came out and grew into a major Trammell fan. I was in eighth grade when he was named MVP of the World Series and in 11th when he led the Tigers past the Jays. I was 25 when he retired and was at Tiger Stadium for his final game. In his last appearance he got a base hit and moved the tying runner over to third. Typical Trammell, doing all of the little things to put his team in a position to win.

Something else....
Everyone knows about Trammell and Whitaker playing the most games as teammates (1918) and have turned the most double plays than any other combination in history. But allow another personal reflection. November 11, 1996. I am at Michigan Stadium for a Penn State-Michigan football game. Halftime I go to use the bathroom and the lines are enormous. I'm looking around and standing directly behind me is Trammell, not two months after he retired. After debating whether or not to acknowledge him, I turn around and say, "Normally I would shake your hand and thank you, but this is really not the place." Trammell laughed and then thanked me for being a fan. Class act.

On this date in 1980:
Paul McCartney is jailed in Tokyo for 10 days on marijuana possession.

By the way, time for another poll. The Burger King Winfield was only the second non-1980s base card to win the election (Ray Knight was the other) 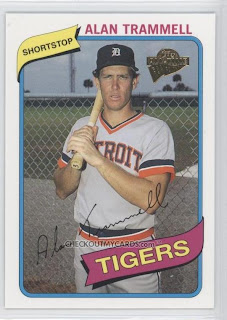 Labels: (On this date), Detroit Tigers